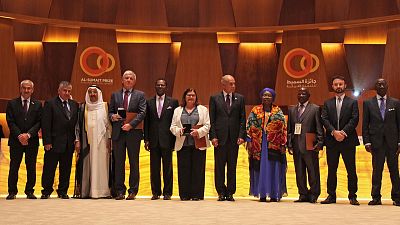 The Kuwait Foundation for the Advancement of Sciences (KFAS) (http://KFAS.org) has announced almost 30 nominations from around the world have been received so far for the US$1Million Food Security category of the 2019 Al-Sumait Prize for African Development, which closes for entries at the end of April 2018.

The annual Al-Sumait prize (www.ALSumaitPrize.org), which is worth one million dollars, is awarded for significant advances in development in the categories of health, food security and education for Africa.

Dr. Kwaku Aning, Chairman of the Ghana Atomic Energy Commission (GAEC) and Member of Al Sumait Prize Board, said: “Food Security is vital to sustainable development and our past laureates of the Prize The International Potato Center and the International Institute for Tropical Agriculture have used the prize monies to great effect by funding and expanding programs to secure a healthy future for the peoples of Africa…”

“We have received many praise-worthy nominations for both individuals and organizations for the 2019 Al Sumait Prize Food Security Category, which provides a great opportunity to promote pioneering food security throughout Africa by bringing scientific, agricultural, economic and social ideas to life. There is still time left to nominate and the selection committee is ready to receive your nominations” said Dr Mustafa Marafi head of the KFAS Prizes Office.

The eventual winner proposed by the selection committee for the prize will be confirmed by the Al-Sumait Board of Trustees, which comprises prominent international personalities in the field of development in Africa and world-renowned philanthropists. The Board is chaired by H.E. Sheikh Sabah Khaled Al-Hamad Al-Sabah, First Deputy Prime Minister and Minister of Foreign Affairs of the State of Kuwait.

Other trustees include Mr Bill Gates, Co-Chair of the Bill & Melinda Gates Foundation, Mr Makhtar Diop World Bank's Vice President for Africa and Mr Abdulatif Al-Hamad, Director General and Chairman of the Board of the Arab Fund for Economic and Social Development.

Announced by the Amir of the State of Kuwait, H.H. Sheikh Sabah Al-Ahmad Al-Jaber Al-Sabah in November 2013 at the 3rd Arab African Summit, the aim of Al-Sumait Health Prize is to contribute significantly to solve major development challenges facing African nations. The prize celebrates the life of the late Dr Abdulrahman Al-Sumait, a Kuwaiti physician who devoted his life towards helping the poor in Africa.

For more information, visit (www.ALSumaitPrize.org) or contact the Kuwait Foundation for the Advancement of Sciences (KFAS) (http://KFAS.org) :
P. (+965) 22270465
E. info@alsumaitprize.org