Kenya / Rugby : Shujaa and Lionesses Squads on Duty at The Hong Kong 7s and Singapore7s 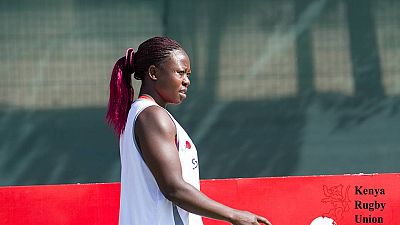 Janet Owino makes a comeback to the Lionesses squad one year after suffering an ankle injury. The injury saw her sit out the 2018 Commonwealth games in Gold Coast, the Africa Women’s 7s held in May in Botswana and the second leg of the 2018 HSBC Women’s Sevens Series, the Dubai7s.

“I’m very happy to be back on National Duty with my team mates. They have been very supportive throughout the last 12 months and this has played a role in my recovery. I am also very grateful for my management team who stood by me throughout my rehab period as well as Lamech Bogonko who played an integral part in it.” Said Janet.

Head Coach Kevin Wambua has brought in Top Fry Nakuru’s Vivian Akumu to the traveling party and she is set to make her debut at the Son Kon Po Stadium on the 4th of April. These are the only two changes made in the Lionesses squad that participated in the 2018 Dubai7s.

Lionesses are in Pool B alongside Papua New Guinea, hosts Hong Kong and next door neighbours, Uganda. “Being pooled with the host nation our fellow neighbors, Uganda and Papua New Guinea means we have to bring our A game from the first game throughout our entire pool games.

It’s a challenge that both the team and I are looking forward to. We also know that if we want to qualify we have to beat all the other 11 teams and that’s what we have to focus on; A game at a time in the process.” Said Wambua.

On the selection of his team, “It’s all about building consistency and a good team which is no easy task. We have a few players who made their debut in Dubai: Christabel Lindo, Diana Awino and Stella Wafula. The team is also very well balanced looking at the experience of players like Chajira, Olando, Aura, Akello and Camila who am sure will be up to the task at hand.”

Shujaa has received a boost of seven senior players who have been training under Paul Murunga since the team returned from Canada.

Andrew Amonde, Augustine Lugonzo and Nelson Oyoo who last appeared for Shujaa at the Paris7s 2018 leg are all in the traveling squad to Hong Kong and Singapore. They are joined by Eden Agero, Daniel Sikuta, Jeffrey Oluoch and Oscar Dennis. The seven players are joining the 2018/2019 regulars of Daniel Taabu, Vincent Onyala, Shaddon Munoko, Bush Mwale, Mark Wandeto and Johnstone Olindi. The team is skippered by Jeffrey Oluoch.

Murunga had earlier stated that the old boys would be given the chance to fight for a spot in the travelling squad since the team that has been training from the start of the 2018/2019 season would be retained.

“Our target is to get 10 points in each tournament. We haven't achieved that yet and it's not impossible to achieve. We have seen teams coming from winning only one game in a tournament to getting in the final in the next tournament. The pool is definitely hard considering our previous out against them. Where we are standing now, no team is easy for us, we have to fight very hard to get a win. And again no team is unbeatable so we also have to play to win.”

Four of the players who were on duty at the Las Vegas and Canada 7s picked up injuries and thus miss out on the Asian outing. Captain Jacob Ojee has academic commitments that see him sit out these two tournaments but he is expected back for the London and Paris7s legs.
The team leaves on early Monday morning.