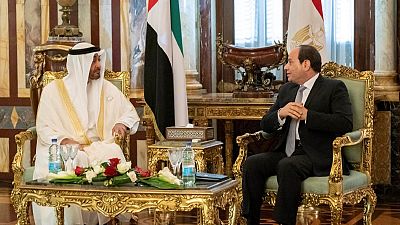 His Highness Sheikh Mohamed bin Zayed Al Nahyan, Crown Prince of Abu Dhabi and Deputy Supreme Commander of the UAE Armed Forces, and President of Egypt Abdul Fatah el-Sisi today reviewed a number of regional and international issues of common interest in light of the robust, brotherly and longstanding relations between the two countries.

This came during a session of talks the two leaders had at Ras El Tin Palace in Alexandria today, where they explored paths of further accelerating cooperation at the political, economic and developmental fronts.

Challenges besetting a number of Arab countries and the efforts being made to strengthen pan-Arab cooperation to safeguard regional stability and protect national gains have been thrashed out during the meeting.

“The UAE under the leadership of President His Highness Sheikh Khalifa bin Zayed Al Nahyan, is attaching a central importance to consolidating the brotherly relations with Egypt to the higher good of peoples of the region,” Sheikh Mohamed said.

“UAEs' support for the Arab Republic of Egypt has been a mainstay of the country’s foreign policy since late Sheikh Zayed bin Sultan Al Nahyan who was aware of the pivotal role and historical and political leverage of Egypt and was cognizant of the fact that Egypt's stability is fundamental to the security of all Arab nations,” Sheikh Mohamed added.

“UAE’s supportive stance of Egypt continued to strengthen under the leadership of President His Highness Sheikh Khalifa bin Zayed Al Nahyan,” Abu Dhabi Crown Prince added, noting the UAE leadership’s determination to bolster the developmental drive and stability-oriented efforts being made by Egypt.

He expressed support for Egyptian president and his keenness to continue to accelerate bilateral relations at all levels.

For his part, the Egyptian president expressed appreciation for the unrelenting support provided by the UAE under President His Highness Sheikh Khalifa for Egypt under all circumstances, reaffirming his country’ keenness to continue to grow bilateral relations at all fronts.

Both sides called for intensifying regional and international efforts to uproot the scourge of terrorism and extremism and to expose the evil powers that foment terrorism through their media and political outlets.

They reiterated their adherence to the promotion of the values of peaceful coexistence and tolerance being the solid basis for regional prosperity, stability and progress.

A number of Egyptian ministers and senior officials attended the meeting as well.

The Abu Dhabi Crown Prince arrived in Ras El Tin Palace earlier today accompanied by the Egyptian President where he was welcomed by senior executives.