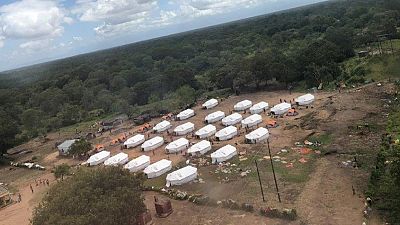 Kobus Botha has been growing mangos on his plantation in northern Mozambique for 11 years. In mid-March, when Cyclone Idai swept through the Matarara crossroads—home to little more than his farm and a nearby school in Mozambique’s Dombe district—he learned that hundreds of his neighbours had fled to his farm. An estimated 500 arrived on the first day, seeking shelter in packing sheds and cold storage rooms. Mr. Botha later heard that thousands more were displaced in the surrounding villages.

Mobilizing tractors, canoes to seek stranded families on the crocodile infested Lucite River, and other farm equipment, the 54-year-old farmer set out to rescue as many as he could. John Diksa, CEO of SOS Attitude of Grenoble, France, came quickly to Botha’s aid and helped strategize with his ad hoc rescue team.

Mr. Botha, who was born in neighboring Malawi, joined with other farmers and family members in Maputo, Mozambique’s capital, to rush food and other supplies to his distressed neighbours. On 24 March, he also sought help from the International Organization for Migration (IOM) team at their command post at Mozambique’s Beira International Airport.

“I came [to Beira Airport] and started fighting the system until I got something,” he said with a laugh.

One IOM staff who helped him was Joseph Ashmore. “Joseph managed to get us [shelter] kits, and when they arrived we managed to get them across the river. We’ve still got another 500 families that need kits.”

The “kits” Botha is referring to are tents, donated by IOM partner UK Aid. They usually get distributed with ground cloths, blankets and tool kits, so families can remain safe until the emergency passes.

Mr. Botha explained that IOM started by dispatching a survey team to view the area around his mango plantation and get a count of the number of families in need. IOM’s Joseph Ashmore dispatched trucks with more than 100 shelters which arrived on Monday.

A small village has risen among Mr. Botha’s mango groves: gleaming white tents where families remain until they are ready to return to their villages. That may take some time.

Mr. Botha is still trying to reach people even further out from his farm. He identified 500 families still needing help along his stretch of the Lucite River. And another 6,000 in Prio Farms a community he recently managed to make contact with in Mozambique’s Nyamatanda district.

“We’ll be back to IOM for sure, as soon as we know what’s what,” he adds, before dashing off see where he’s needed next.

“This is what we should be doing: working with local partners who know  the people and know the situation,” said Mr. Ashmore, who is coordinating IOM's shelter response with other agencies. “Mr. Botha and his colleagues have risen from a disaster and helped IOM make a positive change.”