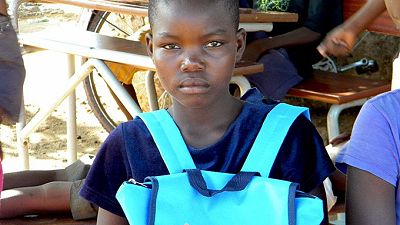 Eleven days ago, Tropical Cyclone Idai made landfall in Mozambique then crossed into Zimbabwe, leaving a wide path of destruction across Eastern Africa. By the time the storm struck, communities throughout Malawi and Mozambique were already reeling from days of fatal downpours and flooding. Humanitarian partners are describing the damage as “massive and horrifying.”

Hundreds are dead or missing in each of the three affected countries, and, in total, over a million people have been affected. With United Nations partners, UNFPA conducted an assessment mission, and is working to rapidly deploy emergency reproductive health services and supplies.

There is critical need for these services.

In Matundo, Mozambique, 30-year-old Tina Patissone was in the late stages of pregnancy when the flooding reached her home just before midnight on 15 March.  She and her four children evacuated, braving the roaring winds to reach the shelter of a local school.

Within hours, she felt the onset of contractions. But no one at the shelter could summon an ambulance; the mobile networks were down.

They did the next best thing: They arranged for a motorcycle taxi to take her to the Matundo Health Centre. There, she very quickly delivered a healthy baby girl, Joana Antonio.

The impact of the storm has been catastrophic. Flash floods and landslides have washed away homes, health facilities, bridges and schools, flooding whole communities.

In Malawi, rainy season floods had already prompted the president to declare a state of disaster earlier this month. In response, UNFPA prepositioned emergency supplies to support flood-affected communities. The humanitarian situation was greatly exacerbated when the Idai storm system tore through the country. It is estimated that nearly half a million women – including over 20,000 pregnant women – have been affected.

In Zimbabwe, lingering heavy rains continued after the cyclone had passed, slowing access to hard-hit areas and exacerbating damage. Tens of thousands have been affected. The president has declared two days of national mourning.

In Mozambique, the official death toll is over 400, and is expected to rise. More than 600,000 people are affected, including 74,000 pregnant women.

UNFPA is working with partner organizations and with governments to provide urgent relief in the form of health services and supplies. In Mozambique alone, UNFPA is helping to support 19 mobile clinicsin hard-to-reach areas, and providing enough reproductive health kits to meet the needs of more than 300,000 people.

In many areas, residents are crowded into makeshift shelters, with poor lighting and little or no separation between families. These conditions could increase residents’ vulnerability to assault. UNFPA is working to prevent gender-based violence and provide services to violence survivors.

In Mozambique, UNFPA is helping to provide 10 women-friendly safe spaces to the support case management for survivors of violence. And in Malawi, UNFPA is working with partner non-governmental organizations to distribute information about gender-based violence, human rights and support services for survivors.

In Matundo, Ms. Patissone received a dignity kit with supplies to assist her in the post-partum period.

“It would be good if these were made available not only in times of crisis but in good times as well,” she said. “Being clean and taking care of oneself is important for women and even more so for a newborn baby.”

After delivering baby Joana, Ms. Patissone discovered that her home was destroyed.

She and her family are now staying with friends, but they are concerned about overstaying their welcome.

They hope to get a tent and begin rebuilding their home, ideally in an area less prone to flooding, said her husband, Antonio Nestala Ntundo.