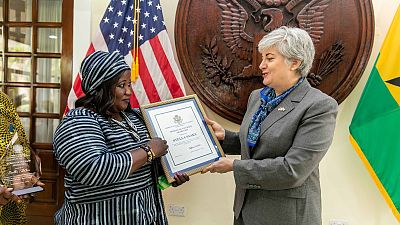 U.S. Ambassador Stephanie S. Sullivan honored Ms. Stella Saaka, from the Talensi district in the Upper East Region, with the U.S. Embassy’s 2019 Ghana Woman of Courage Award during a breakfast ceremony hosted at the Ambassador’s residence. Like the U.S. Secretary of State's annual International Women of Courage Award, this award recognizes a Ghanaian woman whose efforts have exemplified exceptional courage and leadership in advocating for human rights, women’s equality, and social progress, often at great personal risk.

The Minister of Gender, Children and Social Protection, Cynthia Morrison, attended the event, as did Chiefs of Mission and High Commissioners or their representatives from 16 diplomatic missions.

Stella Saaka is a powerful force for women’s rights in the Talensi District in northern Ghana. She is the Regional Organizing Secretary for the Women in Agricultural Platforms (WAPs), a key component of U.S. Agency for International Development (USAID)’s Northern Ghana Governance Activity. In addition to spearheading agricultural income-generating activities for women, Ms. Saaka continues to break barriers in the male-dominated political and traditional authority system prevalent in northern Ghana, convincing the Talensi political leadership to include women in the district’s development and decision-making process.

While presenting the award to Ms. Saaka, Ambassador Sullivan said; “Stella’s actions actively empower the women in her community by helping them to access productive resources and to ensure their voices are heard by decision makers. Her students call her a role model and the women she represents call her a woman of courage. I hope that all Ghanaian women and girls learn about her story, so they can craft their own journey to make a difference.”

Accepting her award, Ms. Saaka said, “I am happy that my work with women in rural Talensi has been recognized by the U.S. Mission in Ghana. I dedicate this award to all my hard working women in Talensi and to all women working hard to empower themselves economically to take care of their families and homes in Ghana.” In describing her approach to working with the local authorities on behalf of women, Stella said, “I come in peace but I mean business.”

Ms. Saaka has distinguished herself among USAID’s Northern Ghana Governance Activity participants, who aim to address the broad issue of access to land in one of the most densely populated districts in the region per square area. Foreseeing an opportunity for women to gain access to land, she was the only woman who successfully addressed long-held traditional customs by involving local chiefs and generating the conversation on why it is important for women to have access to land to generate economic development. This is significant because land tenure consists of a layered system of traditional tribal ownership that has historically disenfranchised women.

Ms. Saaka’s determination and persistence were rewarded when the Chief of Tongo allocated 29 acres of land to 30 women in the district. She and the women started working on post-harvest processing and income-generating activities with sweet potatoes, peanuts, and other agricultural products. Ms. Saaka started processing sweet potatoes in 2014, and the women use the income they generate to support their children’s education. As a means of alternative income generation, they produce a range of products from the orange sweet potato, including drinks, snacks, and flour for making pastries. Due to these efforts, more women are finding ways to contribute to the economy in the district, which has led to a decrease in female migration during the dry season.

Another area where Ms. Saaka stands out is in her civic engagement. Specifically, she convinced the Talensi traditional leadership to include women in the district’s development and decision-making process. As a result, she and her WAP colleagues represent their district at the assembly’s Medium Term Development Planning sessions, which affords these women an opportunity to contribute to their own advancement. Because of their advocacy, the district assembly and traditional and political authorities have now prioritized land tenure security for women, the provision of a tractor for women, and training for female tractor operators.

Ms. Stella Saaka wears many hats in her community: she is a mother, a teacher, an entrepreneur, a women’s leader, and a community icon. Her lifetime achievements exemplified by her resilience and courage set an example for all Ghanaians, especially women and girls.


Distributed by APO Group on behalf of Embassy of the United States – Accra – Ghana.
Media files