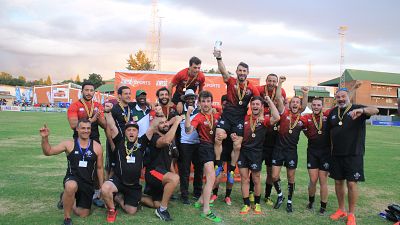 Both sides were unbeaten – Lady Cheetahs conceded only one try in the tournament as they beat Zambia 31-0 in their final while Georgia beat home favourites Zambezi Cheetahs 19-14 to close off the tournament.

The ladies stood unopposed as they were a solid unit which boasted of experienced senior players and the new generation of players.

One the teams old guards Charity ‘Choki’ Mucucuti opened the scoring and the speed and leadership of Constance ‘Kadiki’ Ngwende gave Zambia a torrid time.

“I cannot describe how it feels to win a championship in front of our home fans, they were supporting us all the way and we have won their hearts by giving our best at every moment.”

“All three teams representing the Lady Cheetahs gave their hearts out for two days of god rugby and we hope to get to play at even bigger tournaments,” said captain Ngwende.

“The ladies executed everything we planned, their chemistry on the field and composure on the field would make any coach happy.”

“They really wanted to win this and they not only won a trophy but a new fan base at home, we hope that we get more game time to accommodate the growth and appetite for competitive women’s sevens in Zimbabwe and the rest of Africa,” said Kawonza.

Meanwhile visiting Georgia had entered the tournament as the third ranked favourites behind Zambia and Zimbabwe only to stun the hosts in a nail bitter of a match.

The build-up to the final came off a dramatic 12-7 semi-final against Zambia in which Georgia’s surpassed Zambia’s physicality along with a blistering fast running lines to earn a finals berth.

In the final match of the day Zimbabwe led 14-7 at half time and but the pendulum swung against them as Georgians capitalised of defensive errors in a clinical come back to score two tries in the second half.

Georgian Head Coach Zaal Lejava was on his feast as his charged up players gave Zimbabwe difficult run.

“I am very happy for us, this is my second year as he head coach and this is a big one for my team.”

“It I very important for the boys who want to qualify for the Olympic Games and after this tournament we hope to be much stronger,” said Lejava.

Georgian Captain Ramaz Kharazishvili lauded Zimbabwe for hosting the tournament and giving much needed competition in their quest for Olympic qualification.

“I want to thank  Zimbabwe for inviting us here, it was a tough tournament and Zimbabwe played very good rugby in the final.”

“This will help us get better as we prepare for the Olympics,” he said.

“Unfortunately we did not get the result we wanted, Georgia wanted to win this and they did everything to deserve that win.”

“We are keeping our heads up high and we have achieved a lot of what we planned as we approach the Hong Kong Sevens and other events to come, the key thing was identifying weaknesses and strengths which we did this weekend,” said Nyamutsamba.

The final in the schools category went in favour of Prince Edwards Tigers who beat Churchill Bulldogs (7-7) by virtue of the tournament rules which stated that the first team to score a try will win in the event of a tie that will clash with a live broadcast and where the sudden death would not be played.

This means the Bulldogs will have to settle their age old score with the Tigers and this year’s Dairiboard Rugby Festival.