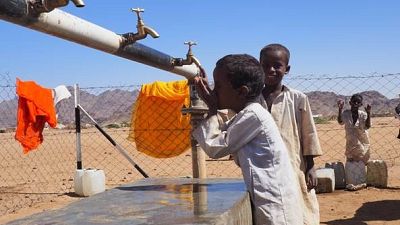 Sudan faces ecological hazards such as water scarcity and desertification. As global population increases and human development advances, the demand for water increases, but availability remains limited.  Access to water is a burden in many parts of Sudan as too many women and children still have to walk kilometers in severe weather conditions to access drinking water sources.

On World Water Day, the High Representative of the European Union declared that “The universal access to water and sanitation is a longstanding core element of EU’s development cooperation. Over the last decade we have spent more than €2.5 billion on water and sanitation in 62 countries, mainly in the African, Caribbean, Pacific countries as well as in our neighborhood. In many of these countries, we implement projects thanks to the strong cooperation with our UN partners – UNICEF, UNESCO and UNECE – and international financing institutions such as the World Bank.”

On this occasion, Ambassador Jean-Michel DUMOND, Head of the EU Delegation to Sudan, confirmed the EU commitment to support better access to drinking water for the Sudanese population. “Drinking water must be accessible, safe and affordable for all without discrimination. The right to safe drinking water is a human right essential for the full enjoyment of life. Moreover, water is becoming increasingly important in maintaining peace and political stability,” remarked Ambassador DUMOND.

The current EU support to the water sector in Sudan amounts to EUR 35,000,000. This funding covers projects that contribute to improving access to safe water, promoting natural resources management to achieve sustainable water use, water efficiency and the safeguarding of water ecosystems.

Amongst these projects are:

EU Ambassador DUMOND states that “By providing water to people, agriculture and livestock in rural areas, the EU and its partners fulfill their commitment of leaving no one behind”.

Distributed by APO Group on behalf of Delegation of the European Union to Sudan.
Media files