The donated equipment includes two complete solar power systems, computers, printers, uninterruptible power supplies to provide battery backup in case of power failure, and a one-year license for antivirus software. The donation is part of a project jointly implemented by IOM, the United Nations Development Programme (UNDP), and the UN Refugee Agency (UNHCR) to promote concrete cross-border, human rights-based, and multi-agency approaches to peacebuilding in border areas between Burundi and Tanzania. It is supported by the UN Peacebuilding Fund.

The donation of this equipment follows technical field assessments conducted in January this year by IOM’s Immigration and Border Management team, along with experts from the General Commissariat of Migration in Burundi, at the targeted entry points. The assessments included an appraisal of existing infrastructures and equipment to ascertain needs, an evaluation of existing national procedures and cooperation mechanisms related to HBM, and identification of training needs, concerns and challenges faced by police and border officers.

Launched in January 2018, this border management project will help mitigate displacement-related instability for both Burundi and Tanzania. One of IOM’s responsibilities is to enhance HBM between Burundi and Tanzania by strengthening the two governments’ capacity in managing and monitoring migration flows at the points of entry.

Activities carried out in both countries include joint trainings and coordination meetings for immigration and border police officers, as well as the development of Standard Operational Procedures for HBM. These initiatives are expected to strengthen international collaboration and coordination for improved crisis management between the two immigration services at the border.

Thanks to the new information technology equipment and uninterrupted supply of electricity, it is expected that officials manning these points of entry will provide improved services to migrants and have increased capacity to manage population flows at the border, even in situations of mass displacement.

Two handover ceremonies were attended by the relevant government officials from Makamba and Ruyigi and a representative from IOM.

“This donation will help improve the working conditions for our colleagues while at the same time benefit the central administration because reports will be sent in real time,” said Romualde Bahomvya, Deputy Migration Police Commissioner.

IOM’s Sébastien Reclaru said: “We are glad that the equipment donated, and the rehabilitated electric system will benefit the communities around the borders as well as users of the supported border posts.”

Prior to the donation, IOM Burundi trained 66 officials from the department of immigration, border police, local authorities, civil protection as well as health and customs from both Burundi and Tanzania, on HBM best practices. The training was designed to improve their preparedness, effectiveness and protection of vulnerable migrants in the context of a humanitarian crisis.

In Burundi, IOM is partnering with the government to carry out capacity-building activities related to migration management and strives to improve collaboration and coordination with neighbouring countries.

Download logo
IOM hands over IT equipment to the governor of Makamba province, Burundi at Mugina border post. Photo: IOM 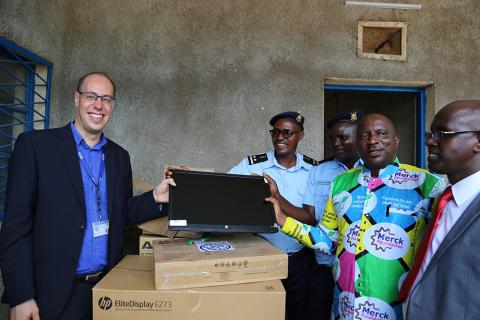