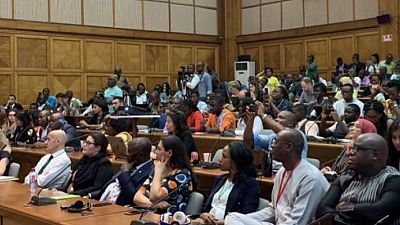 Africa Climate Week formally closed today, concluding a five-day programme of events in Accra – all of which have been hosted by the Government of the Republic of Ghana in the city’s International Conference Center.

At the summary event, speakers presented key takeaways to Ambassador Luis Alfonso de Alba, UN Secretary-General’s Special Envoy for this year’s Climate Action Summit, who will carry them as input into the September gathering. These takeaways were organized around three themes, which have provided the focus of discussions at the Climate Week – Cities & Local Action, Energy Transition, and Nature-Based Solutions – and which correspond directly to three of the ‘Transformational Areas’ that the United Nations Secretary-General has specially selected to guide the Summit in New York City later in the year.

The Special Envoy reminded delegates attending the summary event, which was called ‘Pathway from Accra to the UN Climate Action Summit’, that the September Summit must deliver not a declaration, but a concrete list of actions: “The commitment of the UN Secretary-General is to urgently follow-up with actors that have pledged commitments during the Summit on the progress and implementation of those commitments. We have been looking at this meeting here in Accra to identify actions that are relevant from across the region, such as those on resilience and adaptation.”

But before addressing these takeaways, the Mayor of Quelimane Mr. Manuel de Araújo spoke of how his region is presently suffering the catastrophic impacts of climate change.

Alluding to Cyclone Idai, which has hit Mozambique, Zimbabwe, and Malawi, affecting more than 2 million people, he said: “I think I am well positioned to talk about climate change as my people are experiencing its consequences right now.”

One trend that was highlighted multiple times during the Summary event – and which formed a central part of Monday and Tuesday’s NDC Regional Dialogue – is that African policymakers are now concertedly focusing on the opportunities of their countries’ Nationally Determined Contributions (NDCs). Nationally Determined Contributions are national climate action plans under the Paris Agreement.

However, as was also evident during Wednesday’s high-level segment, the barrier to securing this level of progress remains adequate investment, which needs to be facilitated with proper enabling environments and regionally-tailored financial instruments, such as green and climate-themed bonds, special-purpose bonds, and crowdfunding.

There are many signs of progress.  According to the “Bonds and Climate Change State of the Market 2018” report, an estimated 1.45 trillion green and climate-allied bonds were issued in 2018 alone. Meanwhile, the African Development Bank will double its climate finance commitments for the period 2020-2025. And at the Inaugural regional One Planet Summit in Nairobi last week, the African Development Bank committed at least USD 25 billion towards climate finance, pledging that it will allocate 40% of its annual approvals to climate finance by 2020.

Africa Climate Week is the first of three annual regional climate events this year – the latter two being the Latin America & Caribbean Climate Week and the Asia Pacific Climate Week – information around each of these events will be released shortly. The Africa Climate Week is being organized by a number of core partners, including UN Climate Change, Marrakech Partnership for Global Climate Action, the World Bank Group, African Development Bank, West African Development Bank, CTCN, UNEP, UNEP DTU Partnership, UNDP and IETA.