Access to safe water for all is key to sustainable development 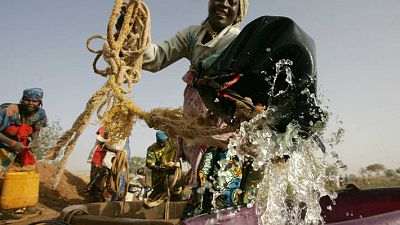 With climate change and population growth putting increasing pressure on finite water resources, FAO is urging countries to step up efforts to increase water efficiency and provide access to safe water for all. Ensuring global water security is fundamental to achieve Zero Hunger and the Sustainable Development Goals, the UN agency said on the occasion of World Water Day.

“Water is universal, it crosses borders and nourishes all life-water is a human right,” said FAO Deputy Director-General for Climate and Natural Resources Maria Helena Semedo, speaking at the closing ceremony of the first International Forum on Water Scarcity in Agriculture (WASAG), co-organized by FAO in Praia, Cabo Verde (19-22 March). “Just like water, we need to flow forward-to leave no one behind, like this year's theme, which reflects the aspiration of the 2030 Sustainable Development Agenda”

In her remarks, Semedo warned about numerous water-related challenges that are hampering global development efforts especially in water-scarce countries where “billions of people are still living without safe water, struggling to survive”.

According to the recently published World Water Development Report, a joint effort by UN agencies and partners under UN-Water, there are more than two billion people living in countries with high water stress.

“As the availability of freshwater decreases due to population growth, urbanization and changing living standards-we see an increase in agricultural, industrial and energy requirements. This struggle for balance is our greatest challenge,” Semedo said, noting that by 2050, global water demand will rise by 20 to 30 percent, while supply will dwindle alarmingly.

Adverse impacts of climate change on food and water security

In her speech, Semedo highlighted that the adverse impacts of climate change continue to undermine food and water security.

“Dry areas tend to become drier; droughts tend to become more frequent and severe; and coastal areas more affected by, among other things, seawater intrusion due to rising sea level. Agriculture is by far the most affected sector in periods of drought leading to crop losses and reduced production,” she said. “Such losses hit farmers and the rural population hardest, especially for smallholders who run over 80 percent of the world's farms on areas smaller than two hectares.”

She argued that, according to recent studies, droughts affected more than a billion people worldwide in a ten-year period, underlining that water scarcity and droughts, sea level rises, desertification, and ecosystem loss are strong social stressors that also contribute to forced migration.

How to tackle water scarcity

Semedo pointed to the need to find innovative sources of water, including recycling wastewater and rainwater harvesting, and increasing water efficiency, especially in agricultural sectors.

“In FAO, we promote measures like selection of drought and salinity resistant species, sustainable soil management and water harvesting. These innovations can go a long way to support farmers, especially smallholders, to guarantee food production in periods of water scarcity,” Semedo said.

Agriculture accounts for 69 percent of global water withdrawals, she said, noting that about 80 percent of the world's cropland is rain fed, producing 60 percent of food.

Semedo referred to Cabo Verde's experience as a positive example other countries can draw on when dealing with water scarcity.  “Cabo Verde is a Small Island Developing State with a dry and unpredictable climate. This exposes us to significant risks for the primary sector, especially agriculture.”

“Despite the country's arid climate, by adopting innovative technologies such as desalination, solar power energy, reuse of wastewater for agriculture and even fog harvesting, 90 percent of the population has access to potable water. That is a highly commendable figure,” Semedo added.

She concluded by saying that FAO will continue to support governments with coping strategies in drought-resistant crops, water harvesting, saline agriculture and other techniques.

“There is an African proverb – When all the water has gone, only the largest stones will remain on the riverbed. We do not want to see the water gone, so let us think of these large stones as the bedrock of our collaboration,” she said.

At the conclusion of the WASAG Forum, delegates from 47 countries adopted today the Praia Commitments, which aim to promote sustainable water management as a driver of development, maximizing synergies across the 2030 Agenda, and support farmers with improved access to financing, innovative technologies and sound water management practices.

A special event to celebrate the World Water Day was also organised at FAO headquarters in Rome with representatives from Senegal, Spain and the Vatican to raise awareness about the importance of water in the context of rural poverty.

Download logo
A woman farmer transferring water harvested from a well into a bucket for watering crops in Keita, Niger