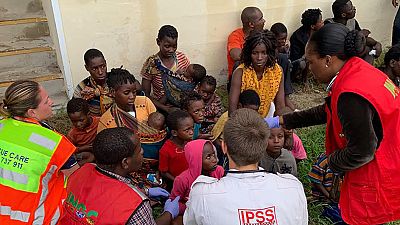 As the full scale of the devastation caused by Cyclone Idai in South-West Africa continues to be assessed, the UN and humanitarian partners are ramping up the provision of emergency food, shelter, water and health care supplies to hundreds-of-thousands who have been affected across Mozambique, Malawi and Zimbabwe.

The cyclone made landfall on Thursday night near Beira City, in central Mozambique, bringing heavy rains and flooding to the three countries and forcing thousands from their homes.

To date, it is feared that over 1,000 may have died in the disaster, with more than 200 confirmed dead in Mozambique, over 100 in Zimbabwe, and around 60 in Malawi. Hundreds are injured and many more unaccounted for.

The cyclone wreaked havoc in Mozambique, the worst-affected of the three countries, causing damage to 90 per cent of Beira City. Inhambane, Manica, Sofala, Tete and Zambezia provinces have been heavily affected. About 400,000 are internally displaced. A national state of emergency has been declared.

In Zimbabwe, the east of the country was particularly affected with close to 1,000 homes destroyed in the districts of Chimanimani, Chipinge, Mutasa, Mutare, Buhera, Chikomba, Gutu and Bikita districts. Through rapid needs assessments in Malawi, it is estimated that over 82,500 were displaced.

These figures are expected to rise in the days ahead as the full extent of the damage and loss of life becomes known.

“The CERF funds will complement the three Governments’ immediate efforts to provide life-saving and life-sustaining assistance to affected communities, including in health, food security, protection, nutrition and education,” said UN humanitarian chief Mark Lowcock. “Vulnerable groups such as children, women who are pregnant or breastfeeding, people with disabilities, and those affected by chronic illnesses will be prioritized”.

The allocation will also help humanitarian organizations to rapidly support critical logistics and emergency telecommunications and scale up water and emergency health services to reduce the risk of vector and waterborne diseases.

Mr. Lowcock explained that CERF funding was just the beginning, and much more will be needed, especially in terms of food assistance in the short- and medium-term as the flooding occurred in the middle of the crop-growing season. Much of the livestock is believed to have perished in the flooding, in areas that were already facing ‘food-crisis’ levels of food insecurity.

The warehouse of the UN’s World Food Programme (WFP) in Beira was badly damaged by Idai, but some food stores remain intact and is being distributed to displaced people in the city and in Dondo, higher north.

Twenty tons of high-energy biscuits have been airlifted in, to be distributed by helicopter in cut-off regions. WFP is also funding drones to support Mozambique’s disaster management agency, the INGC, with emergency mapping. To enable the humanitarian workers to operate, an emergency wi-fi connection was set up in Beira by the UN.

The UN disaster and assessment coordination (UNDAC) team was deployed to help coordinate the response, but access to affected areas is a major constraint in the delivery of aid, as much of the infrastructure such as roads and bridges were destroyed by the cyclone.

“The situation is very bad. The damage is quite serious,” said the head of the UN’s migration agency (IOM) in Mozambique, Katharina Schnoering. “It Is very difficult to get a clear overview of what is going on. There are many communications issues, there’s no power in Beira. There is no road access because the Buzi River came up and washed out the road.”

In Malawi, the representative of the UN Children’s Fund (UNICEF), Johannes Wedenig, said emergency supplies have started arriving in the country but that many were already “pre-positioned in areas of Malawi that are regularly affected by natural disasters”, allowing the UN to move quickly to meet people’s immediate needs, in particular in terms of water and sanitation, medicine, insecticide-treated bed nets, and schools supplies for the establishment of temporary classrooms.