Premiere in Africa of the documentary "Cuba in Africa" 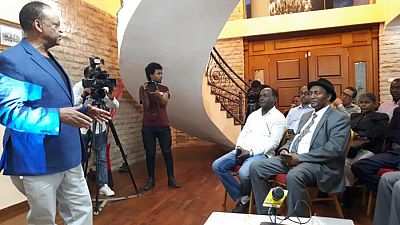 The premiere in Africa of the documentary “Cuba in Africa” made by the Ethiopian Negash Abdourahman was presented at the Embassy of Cuba in this capital.

The material is based on the contribution of Cuba to the independence struggles of African countries, as well as to the preservation of the sovereignty and territorial integrity of them.  The history is recalled from interviews and anecdotes of the Cuban protagonists of these epic moments.

During his indroductory remarksk Mr. Abdourahman acknowledged the decisive role of Cuba, not only from the military point of view but from the civilian one in sectors such as health and education.   He insisted on the task to pass this legacy to the present and future generations of Africans.

The Cuban Ambassador H.E. Mrs. Vilma Thomas highlighted the humble contribution of Cuba to make Africa a better continent and expressed appreciation to Mr. Abdourahman for this touching material.

In attendance, the Cuban community in Ethiopia, members of the Media and of the diplomatic corps, the family of the documentary producer, as well as the staff of the Embassy.

Distributed by APO Group on behalf of Embassy of the Republic of Cuba in Ethiopia.
Media files