Namibian exchange students to Germany tell of their experiences 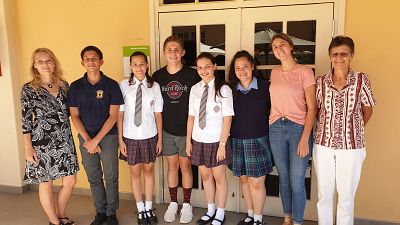 “I was really impressed by the strong family ties and the friendliness of the people.” This is how Mauritz du Preez (Windhoek High School) described his stay in Germany. He is one of six exchange students, who have recently returned from their exchange programme, and who were all enthusiastic about their stay. Representatives from the Association of German School Societies in Namibia (AGDS) and the German Embassy had invited the learners on 11 March 2019 to relate their experiences.

The student exchange is an important tool to foster understanding among students. The Namibian students in particular enjoyed visiting different German cities such as Hamburg or Berlin as well as being able to experience snow for the first time in their lives.

For several years now, the AGDS, in partnership with the German Cultural Relations Abroad (VDA), has made the ten-to-twelve week stay for Namibian youth in Germany possible. The students, all of them ambitious learners of the German language, were hosted by German families and attended their exchange partners’ schools for the duration of their stay.

Assuming the role of ambassadors for Namibia, they contribute significantly to overcoming mutual prejudices whilst building German-Namibian friendships. The current group returned from Germany in mid-January, enriched by many impressions as well as excellent German language skills. In exchange, the Namibian learners will host exchange partners from Germany from June to September, who wish to get to know Namibia and its people.

The learner exchange programme has been supported financially and logistically by the German Embassy for several years. This year’s exchange was supported with N$ 23.714,50.