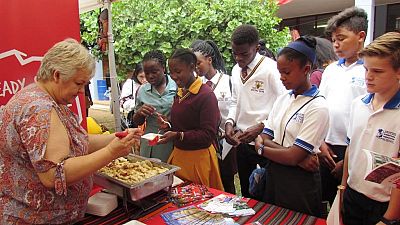 The Francophonie Festival has been organized in South Africa since 2010 at the initiative of the French Embassy in South Africa and the Alliance Française in Pretoria in cooperation with the countries of the Francophone and Francophic communities, members and associates, of the International Organization of Francophonie. This year, the following countries took part in the festival: Belgium, Benin, Bulgaria, Burkina Faso, Cameroon, Central African Republic, Chad, Côte d'Ivoire, Democratic Republic of the Congo, Egypt, France, Guinea, Haiti, Madagascar, Mali, Mauritius, Morocco, Niger, Poland, Seychelles, South Africa, Switzerland, Togo and Tunisia. The festival, which will end on 29 March 2019, includes a series of concerts, film screenings, theater performances, conferences, literary meetings and educational and linguistic initiatives, depicting the entire richness of French language culture on five continents.

The Embassy of the Republic of Poland presented an exhibition about Poland, publications on tourist attractions of our country, information on scholarship programs and study opportunities in Poland as well as media presentations entitled “Poland. Spring into new “,” Tolerance “,” Women of Independence “and” Gentry Democracy “. Delicious dumplings were served at the Polish stand that brought the guests closer to traditional Polish cuisine and Polish flavors. The Polish offer aroused great interest.

The Francophonie Festival is not only an opportunity to celebrate French, but also to remind that there is a close relationship between languages and cultures and that language is a carrier of culture. It is also an opportunity to recall the values common to OIF countries, such as respect for cultural diversity, defense of democracy and human rights, access to education and sustainable development.

The International Francophone Organization (OIF), which was established in 2005, brings together French-speaking countries. 57 countries and governments with the status of members and 20 observer countries, including Poland, are part of OIF. The organization's activity focuses on the promotion of French and French-speaking culture as well as the promotion of peace, democracy and human rights. The organization actively works to support sustainable development. OIF puts great emphasis on the education of children and youth and equality between women and men, as well as maintaining and promoting cooperation between member countries and observers. Poland's participation in this form of multilateral cooperation is conducive to maintaining and strengthening contacts with France and other francophone countries. It is also a forum for expanding and establishing cultural and economic contacts with distant countries, especially from Africa. The International Day of Francophonie is celebrated every year on 20 March.

Distributed by APO Group on behalf of Embassy of the Republic of Poland in Pretoria.
Media files