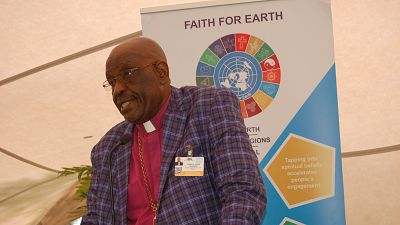 On the sidelines of the UN Environment Assembly in Nairobi, top UN officials, religious leaders and environmental experts underlined the role of faith communities in tackling climate change, a phenomenon that threatens to annihilate humanity.

The assembly opened on 11 March against the dark shadow of the Ethiopian Airline plane crash. The plane crashed soon after take-off from Addis Ababa, killing all 157 persons on board, including Rev. Norman Tendis, a World Council of Churches (WCC) consultant. He was traveling to Nairobi to participate in an event at the assembly titled “Faith for Earth Dialogue.”

“I am impressed by what the UN has done to reach out to this (faith) community. You convene people of faith and there is only one thing – that is goodness in life,”  said Inger Anderson, a Danish economist and environmentalist who has been appointed the executive director of the United Nations Environmental Programme.

She explained that when the different faiths come together, a stronger world and voice for the environment, the planet, sustainability, justice and love is created.

“When I see these people I feel very great – I feel inspired. And I am thankful for the commitment you have,” said Anderson.

The WCC and its African partner, the All Africa Conference of Churches had organized a session titled “Eco-Just Churches and Communities: Models for Living with Justice and Sustainability.”

Tendis was due to elaborate on a Roadmap for Congregations, Communities and Churches for an Economy of Life and Ecological Justice which he had authored.

Rev. Arnold Temple, president of the All Africa Conference of Churches, warned that the world had become ecologically bankrupt, while calling for urgent action to tackle climate change.

The effects were impactful, he said, while highlighting increased droughts, landslides and floods which caused the deaths of thousands.

“The need to act is now. We are calling on our churches to adopt the role of being a blue community,” said Temple. “It has been estimated that by the year 2050, there will be more plastics in our rivers and oceans than fish.”

Canon Rachel Mash, environment co-ordinator of Green Anglicans, an environmental network of the Anglican Church in southern Africa, said from the smallest village to the largest city in Africa, there were churches and other faith groups.

“Can the spiritual power of the churches and other faiths around the world be harnessed to combat climate change? What is the potential of the faith groups?” posed Mash.

“They are in touch with local cultures and local leadership. They have the infrastructure. They got the potential pool of volunteers and an ethic that calls for transformational actions.”

Download logo
Bishop Arnold Temple, the President of the All Africa Conference of Churches (AACC), speaks on March 11 during a faith leaders side event dubbed faith for earth at the U.N Environmental Assembly in Nairobi. Photo: Fredrick Nzwili