‘Everyone must be on board’ for peace in Central African Republic: UN’s Lacroix 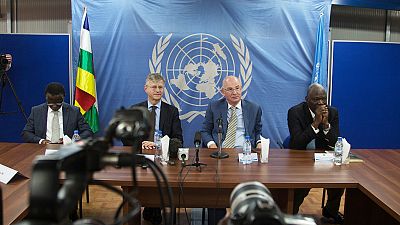 “Now there is a path, it is the path of dialogue. There is a date to start this dialogue, it's 24 January,” said the head of the Department of Peace Operations (DPO), speaking to reporters in the capital Bangui. “There is an organization…which will convene and organize these discussions in Khartoum, it is the African Union,” he added.

Mr. Lacroix has been in the country since Tuesday, alongside the African Union (AU) Commissioner for Peace and Security, Smail Chergui, in a bid to revive a stalled peace process. During his visit, he appealed for all international actors to ensure that 2019 is “the year of peace” for CAR.

Speaking before departing the country, Mr. Lacroix said that all Central Africans needed to be involved, adding that “everyone must be on board and everyone must be mobilized for it to succeed”.

He called for a “period of dialogue and commitment to ensure that the country can turn the page of the violence”, highlighting the importance of the apparent momentum that represents a “chance for the Central African Republic”.

For his part, African Union Commissioner for Peace and Security, Smail Chergui, underlined “everyone's” commitment to implement the initiative. “This is the moment, it is a historic moment for all, really, to stand together and look to the future of this country,” he added.

CAR has been grappling with violence since fighting between the mostly Christian anti-Balaka militia and the mainly Muslim Séléka rebel coalition broke out in 2012. While a peace agreement was reached in January 2013, rebels seized the capital that March, forcing then President François Bozizé to flee.

According to the UN Office for the Coordination of Humanitarian Affairs(OCHA), in 2019, 2.9 million people, more than half of whom are children, will need humanitarian and protection assistance; more than 63 per cent of a population of 4.6 million.

Concerned with the security, humanitarian, human rights and political crisis within the country and its implications for the region, the UN Stabilization Mission in CAR, MINUSCA began operating in 2014 under Chapter VII of the UN Charter.

With the protection of civilians as its utmost priority, Chapter VII provides for the use of force – meaning, with Security Council authority, peacekeepers may respond to acts of aggression in kind.

Download logo
Jean Pierre Lacroix, USG of UN Peace Operations, and Smail Chergui, AU Commissioner for Peace and Security, (center left and right) during their closing press conference after a two days visit in CAR to relaunch the dialogue between the government of the Central African Republic (CAR) and armed groups under the auspices of the African Union (AU) initiative 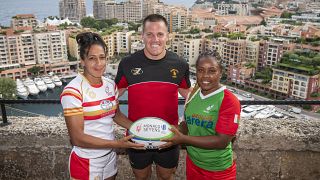