‘Milestones are clear’ for ‘significant progress’ in Somalia during 2019, Security Council hears 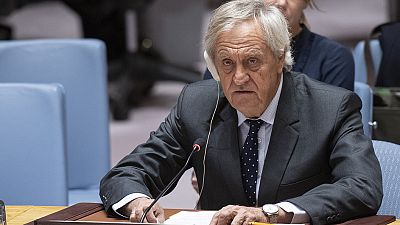 Somali Government efforts to build a lasting peace through political reform and transformation have progressed along a “positive trajectory” but everyone involved in the process needs to “pull in the same direction”, the UN Special Representative in the country told the Security Council on Thursday.

Nicholas Haysom commended the Office of the Prime Minister “for leading Government efforts to tackle corruption”, and praised improvements in public financial management which had led to a recorded surplus of $8 million last September.

But turning to Somalia’s complex “Roadmap on Inclusive Politics” reform process, he said that a “key milestone” had been missed in not meeting the December deadline for a draft new Electoral Law. Despite that, the National Independent Electoral Commission has made progress with voter registration planning, and 35 political parties have been officially registered.

“Women’s meaningful participation” in the Constitutional Review process, and other draft national agreements on justice, mineral resource-sharing, “allocation of powers and fiscal federalism” was essential, said the top UN official from South Africa, who also heads the UN Assistance Mission in Somalia, UNSOM.

Overshadowing progress there however, he said, was a continuing stalemate between the leaders of central Government, and Somalia’s Member States, which “continues to impede progress in defining the federal model, building institutions of state, and in the implementation of the National Security Architecture”.

There had been encouraging steps taken to “restore relations” by the President and Prime Minister, and a committee established to work with the Upper House of parliamentary representatives, Mr. Haysom told Council members.

Risk that ‘complexity shifts to conflict’

The Special Representative noted that “politics is complex in any nation, but in one that is still establishing its norms, institutional parameters” and debating how they will work for the common good “there is a risk that complexity shifts to conflict”.

This had proved the case in the election process for South West State, where allegations of interference by the Federal Government and violence which erupted following the arrest of a candidate who was a former al-Shabaab deputy-leader, “marred the process and does not bode well for upcoming” elections, said Mr. Haysom.

He said it was regrettable that 15 people, including a regional assembly member had lost their lives, adding that the detention of the former extremist group leader, could deter others from abandoning terrorist violence, for the ballot box.

Al-Shabaab continues to be “the biggest source of insecurity in Somalia” said Mr. Haysom, welcoming the Government’s condemnation of the group’s attack on New Year’s Day against the UN’s headquarters in the Somali capital, which injured three staff members.

Thanks to the African Union’s AMISOM troops, and Government forces, conventional attacks have been largely stymied he said, with Al-Shabaab now relying on assassinations and improvised explosives, but “indiscriminate attacks” were still a constant threat.

He added that the UN had “continued to support conflict prevention and conflict resolution efforts in several parts of the country in collaboration with our partners”, said the top official.

Humanitarian needs remain high, with 4.2 million requiring assistance and protection, almost two-thirds of them children. “Around 1.5 million are severely food insecure at crisis or emergency levels. Around 2.6 million people are internally-displaced” he said.

Finally, he added, respect of human rights in the country and international humanitarian law, and the protection of civilians caught up in violence, “remains key for Somalia’s transition and sustainable peace”.

For more on this story including remarks made by the head of AMISOM, and the Somali Ambassador to the UN, go to our UN Meetings Coverage here.

Download logo
UN Photo/Eskinder Debebe Nicholas Haysom, Special Representative of the Secretary-General for Somalia briefs the Security Council meeting on the situation in Somalia, on 3 January 2019