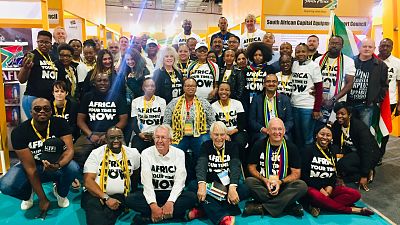 South African companies who recently participated at the seven-day inaugural Intra-African Trade Fair (IATF) hosted in Cairo, Egypt described the fair as a stepping stone for all African businesses who wants to trade and partner with each other. The 40 business delegation showcased their products and services at the South African National Pavilion.

The Managing Director of Conax Manufacturing in Spring, Gauteng, Mr Freddy Mugeri, said IATF is a creative initiative that will take some time to realise as it is new, it will eventually grow from this start and become successful in future.

“Even though there are many challenges to overcome including infrastructure and trade finance solutions in Africa, IATF created a platform for us businesspeople to meet with African countries like Angola and South Sudan which are not so easy to reach outside forums like this one,” said Mugeri

Mugeri added that even though he met with potential client and financial institutions at the trade fair, he still has to do a lot of follow-ups to convert the leads they received in order for them to generate into orders.

The representative of Sunope Pharm in Virgina, Free State, Ms Irene Snyman said IATF afforded here an opportunity to have business to business with key stakeholders in the pharmaceutical industry.

“I will be revisiting Egypt in January 2019 to do clinical trials with the medical board, and follow up on the discussion to appoint an agent and distributor in Cairo to distribute our products in this market and neighbouring countries. I also made contacts with several representatives of several countries and the interest was enormous,” said Snyman.

The South African Ambassador to Egypt, Mr Vusi Mavimbela said IATF is a very important step that was taken by the African continent and that is was long overdue considering that the continent offers diverse economic resources to different markets.

Earlier, the Minister of Trade and Industry, Dr Rob Davies during opening of the South Africa pavilion told business people to consider the continent as an extremely important market, especially for trade in value added products. Minister Davies said that two-thirds of South Africa’s trade are with the world, whilst a third of the trade is with the African continent.  Of the latter, two-thirds comprise trade in value added products.