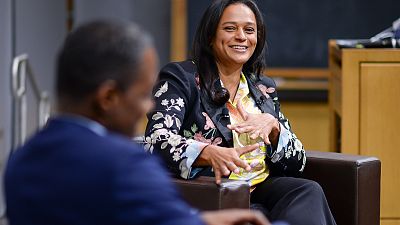 At a United Nations debate in New York, Isabel dos Santos, who is currently the richest woman in Africa (https://bit.ly/2Gxf9aw), spoke of the economic empowerment of African women as a key to transforming society. This and many of her other hopeful and encouraging messages have inspired many citizens in African countries, mainly young women, to pursue their ambitions in business.

Dos Santos believes that some of the most promising and successful businesspeople in the world have been African because of the continent’s entrepreneurial spirit. This spirit, however, has been weighed down by the stigmatization of women in the workplace. This has robbed the economy of valuable innovators and has barred women from achieving their ambitions. But by ensuring that young women can access the same education, job opportunities, and potential for growth as men, dos Santos believes that she can change this attitude and instill a national confidence in women.

This type of thinking falls in line with her more general philosophy of reform: “First the seed, then the future.” This dictum seems to urge against immediate change and, instead, encourages slow and steady growth. The seeds that Isabel dos Santos thinks ought to be planted are also tied up in the economic freedom of women – by creating jobs, providing training, and breaking sexist stigmas, she believes that women can experience increased financial stability while giving their home countries more influence in the international economy.

Isabel Dos Santos (https://bit.ly/2POZHGd) has spent a lot of time planting these seeds in Africa, focusing her efforts in her home country of Angola where she meets with young people and speaks with them about the power of entrepreneurship. Sometimes, she visits them in small, personable rooms at universities and other institutions, other times in much larger ones during her speeches and debates. Most tellingly, she refers to famous African entrepreneurs as a “great family” and invites everyone with the motivation to work hard and come join them.

She often encourages young women to leverage the world’s increased reliance on technology and artificial intelligence, which she refers to as “digitalization”. She believes working toward innovations in technology is key to increasing Africa’s presence in the international economy while flooding the continent with unique employment opportunities. With just a computer and internet connection, unemployed or underpaid citizens can find more work, sometimes with the higher wages that are more commonplace in developed countries, to support their families and stimulate their local economies.

During a conversation with students at the University of Warwick interested in developing Africa, dos Santos tells a young woman who is eager to accomplish her ambitions “now” that she has to be patient and have not just a goal but a string of subgoals to reach it. She goes on to encourages the student to involve herself as deeply as she can in the decision processes that influence that goal, and also to understand that sometimes it’s important to just focus on school, other times on a career or starting a business. This type of advice for strategic hesitance can be found in many of her speeches.

Isabel dos Santos is the daughter of Jose Eduardo dos Santos, Angola’s long-time former president. Much of her wealth came from her investments and her previous position as the chairwoman of an oil company owned by the state called Sonangol. Dos Santos considers herself an independent businesswoman (https://bit.ly/2rLNGrp) and investor and has become Africa’s first females billionaire. Forbes ranks her as the 9thwealthiest billionaire in Africa for 2018.

A Beacon of Hope in a Male-Dominated Market

For young businesswomen in various African countries, her success story has been a beacon of hope. But dos Santos has told various reporters that her rise to riches was marred by the sexism she had to endure in a male-dominated African business world. She has no shortage of stories concerning prejudice and discrimination based on her gender, such as during business meetings where the people she’s negotiating with would look to her male assistant, advisor, or lawyer for validation though she already stated her offer. She is also frequently asked what business her husband is in when her wealth is made clear.

Despite her tribulations in the business world (https://on.ft.com/2EvASNr), Isabel dos Santos has maintained a charitable and hopeful perspective on life and takes on many projects geared toward improving small communities and local economies. One of these projects was in Humpata, in the province of Huila, where dos Santos helped establish a strawberry field, “planting the seed” to empower citizens. This project gave 120 women a place to work and a new income. On her website, dos Santos says:

“Creating opportunities and employment for women means betting on the progress of the communities themselves. When they thrive, women invest their income in the family, health, and education. I value this as a sense of duty, commitment, and dedication. The impact that women create around them is powerful and transformative.”

She calls on other African entrepreneurs to give back to their countries by investing in similar projects. Though they seem small-scale, she believes that with enough support, this type of philanthropic work can create a value chain large enough to impact the national economy. As a result, smaller communities will have more prosperous citizens and influence. Should those new entrepreneurs be African women, then dos Santos hopes that their success will help chip away at the stigma that women are less competent than men.

This is all part of one of Isabel dos Santos’ larger goals to increase the prosperity of African countries as a whole. She plans to accomplish this by working from the ground up, focusing on the individual, such as the promising young men and woman of various African countries. By empowering them, she is, in turn, empowering their communities. This creates value within towns that have historically not had the chance to prosper, and by strengthening local economies, the national economy itself is bolstered.

“This is the true transformation of a country,” she says. It starts with a little hope and promise, with planting the “seeds”, and then, through the hard work of a community’s individuals, a brighter future can be earned.”

Distributed by APO Group on behalf of Chronicle of the Week.
Media files