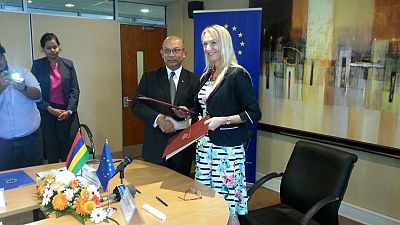 The Government of Mauritius and the European Union held a High Level Policy Dialogue on Climate Change to discuss how to bring their partnership in climate change to the next level. Participants from various ministries, the private sector and the civil society attended the event. The European Union also announced a new support of EUR 3 million to strengthen research and innovation capacities in agriculture to face the challenges of climate change.

According to Marjaana Sall, Ambassador of the European Union to the Republic of Mauritius:

She added: -” I take this opportunity to announce our new support to the Government of Mauritius for an amount of 120 million rupees to boost innovation in agriculture to be more resilient to the effects of climate change.”

Stakeholders from several ministries dealing with climate change issues, the private sector and Non-Government Organisations involved with climate change mitigation and adaptation participated in the High Level Policy Dialogue on climate change. The Dialogue was cochaired by the Minister of Social Security, Reform Institutions, Environment and Sustainable Development and the EU Ambassador, in the presence of the French Ambassador and the British High Commissioner.

Paris in 2015. It is also an occasion to discuss how the European Union, including its Member States, can further assist Government in meeting its mitigation and adaptation commitments. This is a continuous dialogue, to monitor progress and see how the EU and Mauritius can work together.

The EU and Mauritius have agreed on a Joint Management Framework on Climate Change which is focused on six objectives that will be jointly monitored:

The High Level Policy Dialogue takes place less than one week after the COP 24. It illustrates the commitment of both Mauritius and the European Union to join forces to address climate change and meet their commitments made in Paris 3 years ago.  The Policy Dialogue follows the EU-Mauritius Political Dialogue, when it was agreed to hold a dedicated policy dialogue on climate change. Since March 2018, the European Union with its resident member states and the Ministry of Environment and Sustainable Development have held a series of technical meetings with various ministries to identify possible objectives to be included in a Joint Framework.