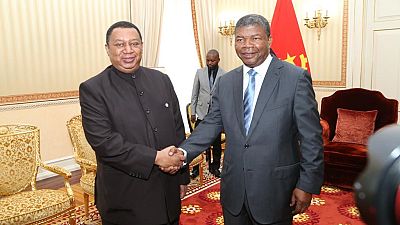 Angola’s leadership is undertaking crucial tax and policy changes to diversify the economy while opening the oil sector to new investment; H.E. Mohammad Sanusi Barkindo visited Luanda for the first time as Secretary General of OPEC; Barkindo on Angola: “Right reforms at the right time”

During his first visit to Angola as the head of OPEC, H.E. Mohammad Sanusi Barkindo lauded Angola’s leadership for its strong reforms in the oil and gas sector — which span from tax reforms to new gas monetization policies — during a two-day visit in Luanda that wrapped up today.

“We congratulate the government’s heroic efforts to reform the industry. These are the right reforms at the right time. We at OPEC applaud these reforms,” said H.E. Mohammad Sanusi Barkindo, Secretary General of the Organization of the Petroleum Exporting Countries.

H.E. President João Lourenço and his administration, including H.E. Diamantino Azevedo, Minister of Mineral Resources and Petroleum of Angola, have pushed through a series of bold regulatory reforms aimed at attracting new investment and diversifying the oil-dependent economy, including tax reforms, the creation of the new National Agency of Petroleum to manage oil and gas concessions, putting a new focus on downstream investment, the creation of a new institute for the regulation of oil and gas byproducts, and implementing new policies to encourage the utilization and monetization of gas.

Barkindo’s visit to Angola was his first in his capacity of secretary general of OPEC, and comes shortly after Angola joined the Gas Exporting Countries Forum as a new member and as the country is aggressively pursuing new investment in its mature oil and gas industry. Angola’s current oil production is 1.49 million barrels per day.

During the visit, Barkindo emphasized Angola’s role as one of 25 countries now participating in Declaration of Cooperation between OPEC and non-OPEC members to reduce oil output and maintain oil price stability, adding that “this stability is good for both producers and consumers.”

Angola’s investment outlook has improved with the oil price in 2018, with new projects in the country reaching final investment decision, like Total’s Zinia deepwater project. The government is also executing a new strategy to ensure self-sufficiency of oil supplies by investing in new and existing oil refineries, including the refineries at Cabina and Luanda.

“Despite the efforts of our government to diversity our economy, oil still plays an important function in our growth. As such, stability is very important to our industry,” said Azevedo.

The Ministry of Mineral Resources and Petroleum also hosted a workshop during the visit for OPEC to educate local industry members on the global role of OPEC.

“History will conclude that Angola joining the OPEC family was a precursor to members of our organization increasing and a strengthening of the African voice in our decision-making structures and this new era of cooperation amongst oil producing countries,” Barkindo said.