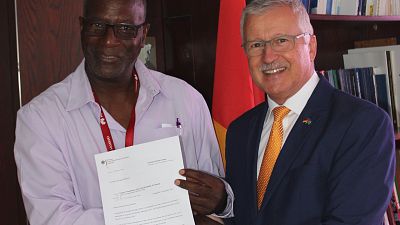 Moses Shivakola-Mberira, Founding Member and Regional Film Development Executive of the Filmmakers Association of Namibia (FAM), will participate in an information tour to Germany within the framework of the 69thBerlin International Film Festival. The visit takes place from 6 to 14 February 2019 and is part of the Visitors’ Programme of the Federal Republic of Germany. German Ambassador Christian Schlaga handed over the letter of invitation yesterday (17 December).

Together with other film makers, producers and film critics from different countries, Shivakola-Mberira will be introduced to the different sections of the festival and attend the live broadcast of the festival's opening ceremony and the opening film of the 69th Berlin International Film Festival 2019. The visit’s programme also includes discussions with government representatives on cultural policy with regard to film funding and talks with young up-and-coming directors. Participants will have the opportunity to network with each other and with the film scene in Germany.