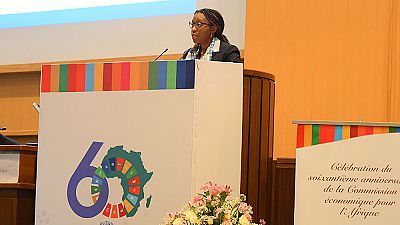 The Economic Commission for Africa marked its 60th anniversary this week with an official event attended by members of the Diplomatic Corps and key representatives from partner institutions, Think Tanks, Civil Society Organizations, University Students, High School Students and the Private Sector.

In his remarks, Ethiopia’s Deputy Prime Minister Demeke Mekonen congratulated the ECA for its contributions to the Continent’s development and said: “ECA has been the most important and effective institution in development our knowledge across a range of issues relevant to Africa’s development. He emphasized ECA’s support to the process of the realization of the Continental Free Trade area, the role it has played in Africa’s transformation agenda and the implementation of the Sustainable Development Goals and Agenda 2063.

“It is an anniversary that underlines the effective solidarity and real cooperation of the ECA and Africa”, he said and added that the commemoration was taking place at an exciting time of change and reform in the country, as well as the peace between Ethiopia and Eritrea.

For her part, the ECA Executive Secretary, Vera Songwe congratulated all staff, past and presence for their contributions and said: “We must continue to listen and engage with member States and other key stakeholders, including the private sector, academic institutions and civil society organizations to ensure that ECA’s activities respond to the new and emerging challenges of the continent and the aspirations of Africans.”

Looking ahead, she said, an estimated 40 million jobs will need to be created every month by 2020 to absorb the number of young people entering the workforce. As such, bigger and bolder actions to accelerate the pace of sustainable economic growth and development will be needed.

Achim Steiner, UNDP Administrator congratulated the ECA for its role in promoting economic and social development of Africa and fostering regional integration since its founding.

Kwesi Quartey, AUC Deputy Chairperson provided a poignant historical overview of the ECA and the importance of its founding at a time when many African countries had not gained independence.

To mark the occasion, a series of events took place in the ECA Subregional Offices as well as in Addis Ababa. A football tournament resulted in a win by the African Union Commission. A highlight of the celebrations was the innovation prize involving students from schools in Addis Ababa, which brought attention to the role of the youth in creating solutions to meet Africa’s development challenges in the coming decade. Awards were presented along various categories, including art. ECA staff, having taken part in a separate innovation contest on institutional projects and initiatives were also acknowledged and awarded by the Executive Secretary.

For images of the event, including video messages and roundups, go to www.uneca.org/eca60 and follow the hashtag #ECAat60 on Twitter.