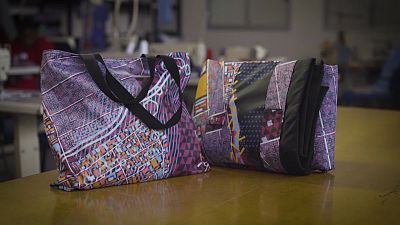 The Digital Transformation of enterprise and society is changing the way people work and how we function. Siemens (https://www.Siemens.com) is leading the charge in embracing digitalization to make a positive impact in society. Partnership with Legae Larona, 100% Black owned Women Enterprise, to create proudly South Africa merchandise using a data visualization of Alexandra.

Data collection and its interpretation is a leading factor in economic growth and development and has become an irrefutable part of our future. What we know and understand about the world will continue to be predicted and projected via information garnered from generations gone by; enabling communities, cities and countries to transform, learn and grow. The Fourth Industrial Revolution (4IR) and Digitalization are often misunderstood terms and viewed with apprehension in many emerging economies. In the African context, disruptive technology should be viewed as a driver of development.

The AlexandraSeries is a true reflection of the many possibilities that exist in this new age of digitalization. This project, inspired by the #SiemensFABRIC campaign (https://sie.ag/2BLqBgB) showcases the impact that data collection, analysis and visualization can have in catalysing the township economy. Understanding the layered intricacies of African cities is the foundation of #SiemensFABRIC- A revolutionary project that showcased how the underlying data of an African city can help transform them into the smart cities of the future – demonstrated by using data to design unique fabrics for each city.

“We embarked on a data visualization project in Alexandra to see what could be learnt about the “DNA” of the township but also how this information could be better understood to improve living conditions for the community, said Keshin Govender, Group Head of Communications, Siemens Southern and Eastern Africa.  After tapping into our digital resources to consolidate this data, we used the visualization to create layered patterns of the community which were then printed onto South African woven fabric. The result; a vivid visual representation of the community of Alexandra told through its data attributes.”

Siemens CEO for Southern and Eastern Africa, Sabine Dall’Omo says “Using the data visualizations we were able to see and understand the township and the challenges it faces, but we were also able to identify areas where we could make a tangible and sustainable difference in the Alexandra community.”

Sabine Dall’Omo says, “As part of our Enterprise Development programme, we identified a 100% black women owned business, Legae Larona Sewing Cooperative, who then used this fabric to create great South African products for our employees as well as members of the broader South African business community. The cooperative is now a fully functioning business receiving orders from other companies as well.”

“Through data, a lot could be learnt about an industry, community or a city. At Siemens, we are leading the charge towards digitalization including the challenges it brings and we’re using that to positively impact the country,” concludes Sabine.


Distributed by APO Group on behalf of Siemens AG.

If you would like to receive a complimentary bag that was produced by Legae Larona (example attached), please reach out to us by 21/12/2018

About Siemens AG
Siemens AG (www.Siemens.com) (Berlin and Munich) is a global technology powerhouse that has stood for engineering excellence, innovation, quality, reliability and internationality for more than 170 years. The company is active around the globe, focusing on the areas of electrification, automation and digitalization. One of the largest producers of energy-efficient, resource-saving technologies, Siemens is a leading supplier of efficient power generation and power transmission solutions and a pioneer in infrastructure solutions as well as automation, drive and software solutions for industry. With its publicly listed subsidiary Siemens Healthineers AG, the company is also a leading provider of medical imaging equipment – such as computed tomography and magnetic resonance imaging systems – and a leader in laboratory diagnostics as well as clinical IT. In fiscal 2018, which ended on September 30, 2018, Siemens generated revenue of €83.0 billion and net income of €6.1 billion. At the end of September 2018, the company had around 379,000 employees worldwide. Further information is available on the Internet at www.Siemens.com.