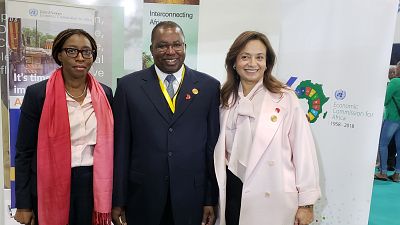 Smaller African economies should not fear the African Continental Free Trade Agreement (AfCFTA) but rather embrace the accord for the benefits it will bring to the continent through expanded intra-African trade, says Economic Commission for Africa’s (ECA) Executive Secretary, Vera Songwe.

In a speech read on her behalf at the 7th meeting of the African Union Ministers of Trade (AMOT) at the on-going Intra-African Trade Fair in Cairo, Egypt, by David Luke, Coordinator of the ECA’s African Trade Policy Centre (ATPC), Ms. Songwe said there was nothing for smaller nations to fear.

“Beyond central technical considerations in relation to the design of AfCFTA modalities, ECA’s assessment reveals that smaller economies should certainly not fear the AfCFTA reforms but rather embrace it; particularly, as African LDCs would be those getting the largest increase in intra-African exports of industrial products,” she said.

“And of course, it must be underscored that such benefits will only materialize if the AfCFTA reforms are properly designed and effectively implemented.”

She continued: “Our analysis shows that the AfCFTA is win-win for all countries, big and small, agricultural and industrial, landlocked and coastal, in regard to both increases in exports and overall welfare or GDP.”

Ms. Songwe said the ECA is strongly committed to continue supporting AU member States towards the successful realization of the AfCFTA.

The ECA is currently assisting member States with the development and implementation of much needed national AfCFTA strategies, to ensure they can best benefit from the reforms.

“A strong emphasis must be placed on education and skills development in Africa to ensure that the adequate workforce is available, especially in industrial sectors, to transform the trade opportunities envisaged from the AfCFTA into reality,” she said, adding the role of the private sector to harness trade for Africa’s development must not be overlooked in the process.

“It is the private sector that trades, innovates and generates most jobs. Each member State must by now have in place an AFCFTA national implementation committee as recommended by the AU Summit that includes private sector participation,” said Ms. Songwe.

She said getting the AfCFTA right ‘certainly starts by ensuring that every single element which is part of the agreement, including modalities on trade in goods, is designed to best facilitate the maximization of the benefits of the reforms for African economies’.

In order to assist AU member States address these issues, ECA recently developed a toolkit suggesting several options or criteria to come up with lists of excluded, sensitive and non-sensitive products. The institution also undertook an empirical analysis to assess the expected incidence on African economies of the different suggested options according to the two envisaged liberalization approaches, that is tariff line approach vs double qualification approach.

The Trade Ministers, in their AfCFTA negotiations, have already agreed to liberalize 90 percent of tariff lines. As regards the remaining 10 percent, the current proposal before the ministers of 7 percent of tariff lines to be designated as sensitive products, and three percent as excluded products representing not more than 10 percent value, is being hailed by the ECA as a good compromise.

The ECA’s assessment of the AfCFTA modalities on goods suggests at least two key messages that should not be overlooked to get the most out of the AfCFTA reforms.

The findings demonstrate that a double qualification approach to liberalize trade in goods under the AfCFTA would generate larger trade-related benefits for African countries than a tariff line approach.

Liberalizing trade in goods within Africa using a double qualification approach would provide stronger potential to favor Africa’s industrialization process, especially as it ensures intermediates – which can be used to add value in the production process – are liberalized early and therefore rapidly utilized as relatively cheaper inputs towards value addition.

ECA’s analysis also clearly illustrates that African countries should keep their exclusion lists to a minimum in order to maximize the trade-related gains.

The results from the ECA’s empirical work further indicate that a 100 per cent liberalization would still generate greater benefits for African countries, suggesting that the absence of excluded lists is ultimately preferred.