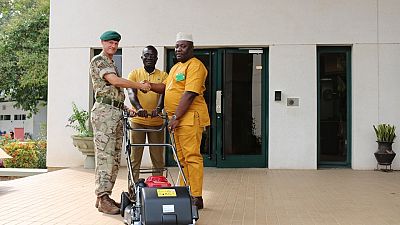 On Wed 12 Dec 18, at the British High Commission in Accra, the United Kingdom Defence Adviser to Ghana, Lt Col Simon Westlake RM, presented to the Director of the Department for Works and Gardens, Mr Ishmael Browne, a large quantity of equipment to assist with the maintenance of the Commonwealth War Graves Commission Cemetery in Accra.

The Cemetery contains 416 Commonwealth war burials, and 3 foreign national war burials and 18 non-war burials, whilst the Christiansborg Memorial, which provides the entry to the Cemetery, commemorates over 450 Second World War servicemen who enlisted in the Gold Coast, who died in West African territory, and whose graves are unknown or cannot be maintained.

Commonly known as the Cristiansborg War Cemetery and established in 1941, the site is now maintained to an excellent standard by Ghana’s Department for Parks and Gardens, on behalf of the Commonwealth war Graves Commission.

It has been described by the Commission as a ‘wonderful example…that has benefitted from a consistently higher standard of horticultural care than its contemporaries’ and as ‘perhaps the most visited site in West Africa’.

Indeed, in recent years Their Royal Highnesses The Prince of Wales, Duchess of Cornwall, Princess Royal and Earl of Wessex have all participated in ceremonies at the Cemetery to commemorate Commonwealth, and particularly Ghanaian, sacrifices.

This equipment, which includes 4 petrol powered mowers and a wide range of other equipment, will increase the capacity of the Department of Parks and Gardens to maintain the Cemetery at an exceptional standard, and will make the work easier to manage for the small team of gardeners.

“As demonstrated each year on 11 November, the United Kingdom has a great appreciation for the part played by our Commonwealth partners in both World Wars, and in conflicts since.

“As a mark of that appreciation, just this year some GHc 350,000 has been provided for Ghana’s pre-independence veterans, whilst the United Kingdom has also launched a project worth £11.8 Million to protect 7000 Commonwealth veterans of the British Armed Forces from extreme poverty.

“This latest presentation now provides the hard-working gardeners in Accra with modern equipment, suited to their needs, whilst also marking our respect and gratitude for the work they do to maintain the Christiansborg Cemetery to a standard befitting of the sacrifices made by those buried or commemorated in Accra.”