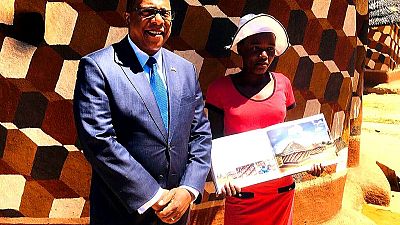 United States Ambassador Brian A. Nichols participated in a ceremony to launch a publication, documenting Ndebele traditional hut decoration in Matobo Hills. The U.S. embassy is leading efforts to preserve Zimbabwe’s rich cultural heritage and supports preservation of Zimbabwean art as part of expanded engagement between the United States and Zimbabwe.

In 2016, the State Department Ambassador’s Fund for Cultural Preservation awarded $42,000 to the National Gallery of Zimbabwe to document Ndebele traditional hut decoration, including a book on Ndebele art. The book documents the external and internal art, architecture, and decoration of Ndebele homes through schematic drawings and photographs. It highlights the significance of these forms in the context of culture, environment, and local Ndebele history.