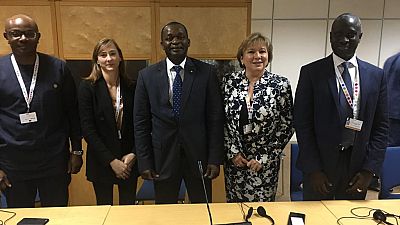 The Minister of Trade, Informal Sector, Consumer Affairs, Local Product Promotion and SMEs, chaired on Monday afternoon in Nairobi a panel organized by the African Performance Institute (www.Performance-Institute.org), led by Ibrahima Nour Eddine DIAGNE. This panel was held on the margins of the African E-commerce Week organized for the first time in Africa by UNCTAD.

Opening the meeting, the Minister described the issue of electronic commerce as a national, regional, continental and global issue. He spoke about the cross-cutting nature of the issue, which therefore requires a concerted and consultative approach. According to him, success in digital entrepreneurship depends on three factors: talent, technology and capital. He shared with the audience the many efforts of the Senegalese government to support entrepreneurship in general and digital technology in particular.

During his keynote address, Mr. Ibrahima Nour Eddine DIAGNE also spoke about to the challenge of making E-commerce a lever for creating value for African economies. He stressed that most of the barriers to electronic commerce have been gradually contained over the past decade.

But he noted that new challenges are emerging and threatening the development of E-commerce in Africa which essentially are rapid technological advances, market concentration around digital giants, data and regulatory issues.

In the face of this silent revolution, he said that Africa would be at risk of further marginalization if it merely observed the transformations without anticipating them. He put forward some ideas to facilitate Africa’s positioning in e-commerce.

Following him, the Executive Director of the International Trade Centre, Ms. Arancha GONZALES focused her intervention on the need to consider that it is indeed the 1st digital evolution and not the 4th industrial revolution that is taking place before our eyes. According to her, governments must focus on the following three main pillars: Ensure adequate regulation, promote entrepreneurship, foster public-private dialogue. She also stressed the importance of promoting innovation.

Her words were echoed by Ms. Ana HINOJOSA, Director of the World Customs Organization, who highlighted the growing importance of cross-border electronic commerce and the challenges it poses for customs administrations, which must ensure security, facilitation and revenue collection.

The World Economic Forum representative pragmatically pointed out that taking into account the problems of electronic commerce can overlook the consideration of the following aspects: Implement the agreement on trade facilitation, apply the rules on electronic transactions, ensure legal protection for consumers in a harmonised context, address data governance and finally ensure the availability of secure and efficient means of payment.

Concluding the panel, Minister Alioune SARR reviewed the regional dimension with the ZLECA and the availability of adequate funding mechanisms.

While thanking the participants, API President Ibrahima Nour Eddine DIAGNE, organizer of the session, reiterated the need to focus efforts and act quickly given the risks associated with the status quo.

Distributed by APO Group on behalf of African Performance Institute.