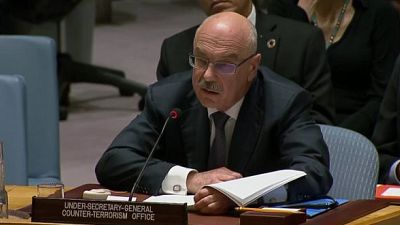 The Head of the United Nations Office of Counter-Terrorism (UNOCT), the Under-Secretary-General Vladimir Voronkov has concluded a visit to Jordan to participate in the Aqaba Process meeting on East Africa.

The Aqaba Process was launched by His Majesty King Abdullah II of Jordan in 2015 to comprehensively address interconnected counter-terrorism and violent extremist threats through informal discussions around three key themes: Prevention, Coordination, and “filling in the gaps.”

On the margins of the meetings, Mr. Voronkov had an audience with His Majesty King Abdullah II of Jordan. Mr. Voronkov paid tribute to the vision of His Majesty King Abdullah II in establishing the Aqaba Process, which is an important contribution to strengthening international and regional cooperation. He said that the level of discussions and the high-level representation make the process unique in its ability to bring key stakeholders together in discussing strategic and sensitive counter-terrorism issues.

His Majesty and the Under-Secretary-General expressed readiness to explore ways in which United Nations could work in partnership with the Aqaba Process to advance the global counter-terrorism agenda.

Mr. Voronkov also held bilateral meetings and discussions with a number of high-level officials and participants on the sidelines of the Aqaba Process meeting.