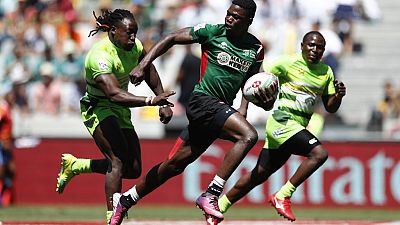 Shujaa (ShujaaPride.com) wrapped up their Cape Town7s campaign two positions higher than they did in Dubai7s last weekend. The team finished in the third place after seeing off Wales Rugby 33-26 in the final.

Shujaa beat Zimbabwe 31-19 as Johnstone Olindi, Daniel Taabu, Dennis Ombachi scored a try each while Vincent Onyala scored a brace. Taabu added two conversions while Olindi added one. Zimbabwe scored three tries through Shingirai Katsvere and Stephan Hunduza(2). Hunduza and Tarisai Mugariri booted in one conversion each. Shujaa advanced to the 13th Place final where they met Wales who beat Japan 28-7 in the other semifinal.

Olindi started the match off with a try in the first minute with Taabu sure with his boot taking the scores to 7-0. This lead was short-lived as Wales dotted down three tries in the first half through Owen Jenkins, Tomi Lewis and Jay Jones and two successful conversions for Wales to lead 19-7 at the breather. Second half Shujaa scored four tries as Cyprian Kuto and Leonard Mugaisi landed a try each while the young Johnstone Olindi scored twice. Taabu converted three of the four tries taking shujaa to 33-19 lead with a minute to play. Luke Trehame scored the last try in the match for the Welsh and he added the conversion but time did not favor their comeback as Shujaa walked away with the win.

Earlier in the day, Head Coach Paul Murunga mentioned that the team needed to maximize on their attacking opportunities to ensure they are able to win the day two matches. Captain Eden Agero commended the young boys on his squad, “We have had a fairly young squad and the good thing is that they have the hunger to win. As a team, we are picking up the lessons as we move on to the next match/tournament.”

The Hamilton7s Pools were released after the conclusion of the Captown 7s. Shujaa are in Pool C along side South Africa, Scotland and for the third time this season, France. The Hamilton7s is the third leg of the HSBC Men’s World Sevens Series and will take place on the 26th and 27th of January 2019.

As it stands, Shujaa sits at the 14th position in the overall ranking with four points in total.