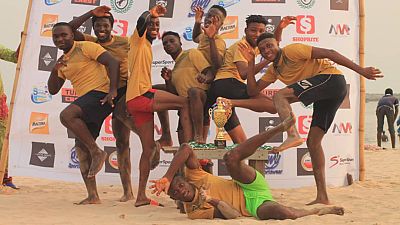 NationSport reports that the event which took place at the Takway Bay Beach on the 1st and 2nd of December, witnessed friends and lovers of Rugby in attendance, enjoying every fun of the game.

Speaking with the organiser of the event, CEO Turbocrest Sports, Olatunbosun Ayo Johnson, said the purpose of the event is to gain the attention of Lagosians and Nigerians at large and also promoting Takwa Bay as a tourist attraction centre.

“We are hoping to gain attention of Lagosians. It’s really small and Nigerians are looking forward at promoting Takwa Bay as a tourist attraction and also the game of Rugby, as well as bringing to the understanding that the game is not a game for animals.”

Still speaking on the quality of the game, Johnson mentioned that the level and tension of the game is quite intense and that is what the game is about.

The day two therefore witnessed the club category with eight teams participating with both Eco11 RFC and Racing RFC contesting for the trophy.

The game which had to move into extra time with each player from each team coming out after two minutes base on the rules of the game saw Eco11 RFC scoring two tries from Kareem Quadri and Prince Amgbare against Racing RFC at the finals.

Present at the event, General Manager Nigerian Rugby Football Federation (NRFF), Mr. Mike Archer, appreciated the fans that turned out for the event. He noted that BeachRugby is a great development for the players to have fun after the long league season.

“I think Beach Rugby is a great development and this is the sixth year we have been having Sandie Beach Rugby. It’s an opportunity to have players come out here to enjoy themselves. Its being a long season, the players have trained hard and during this event people come to relax and have fun at the Beach.

“Beach Rugby is a celebration of the joy of Rugby and we need to thank the people of Takwa Bay who are very kindly every year and I think the future is good.

Archer called on corporate organizations to join hands in growing the game.

“Obviously, we hope more sponsors can help in growing the game hopefully inviting teams from other part of the state like Port Harcourt, Kano and Kaduna. Rugby has been in Nigeria but not much awareness and I hope the federation will be working very hard to raise the game’s awareness level.

“It is a game meant for boys and girls, we had girls played yesterday; that is one of the beauties of Touch Rugby, which is not as physical and tasking as the main game