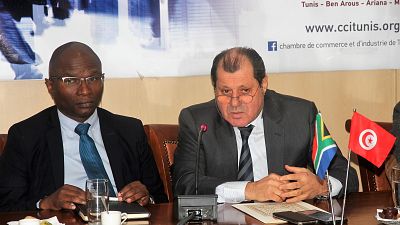 The Deputy Minister of Trade and Industry, Mr Bulelani Magwanishe has received the assurance of the Tunisian businesspeople that they are keen and committed to the establishment of the joint South Africa-Tunisia Business Council with the aim of stimulating trade and investment between the two countries. Magwanishe used the second day of the Outward Trade and Investment Mission to Tunisia organised by the Department of Trade and Industry (the dti) to visit several Tunisian business associations in Tunis.

“We are in Tunisia with a business delegation for the trade and investment mission and what stuck out like a sore thumb throughout our interaction with both the country’s business and government leaders since our arrival is the disconcertingly low levels of trade and investment between the two countries. As government we recognise that the critical stakeholders that are in a position to change the status quo that we are worried about are businesspeople from South Africa and Tunisia. This is the reason why we have embarked on a serious engagement with the Tunisian private sector so that we can get the ball rolling to bring them in contact with their South African counterparts in order to do business,” said Magwanishe.

During the meetings, Tunisian business associations expressed their desire and keenness to work with the South African business chambers and associations to contribute in increasing trade and investment between SA and Tunisia. They all indicated that the starting point would be the establishment of a joint business council that would facilitate interaction and exchange of information among the businesspeople with the aim of identifying opportunities to jointly explore for investment and trade purposes. Magwanishe said the council would not only be focusing on trade and investment only but will also facilitate skills transfer, industrialisation and infrastructure development.

“We are amenable to the idea of establishing a joint business council as the first priority. Our association wants to forge relations with companies in South Africa through cooperation with the local business associations or chambers there. We have member companies that have invested in other countries and we are confident that they will be interested in investing in South Africa as well if we manage to set up the appropriate platforms and connections that will enable us to share information on what is available there in South Africa in terms of investment and trade opportunities,” said the Board Member of the Tunisian Union of Industry, Trade and Handcrafts, Mr Abdesalem Loued during his meeting with Magwanishe.

The President of the Tunis Chamber of Commerce and Industries, Mr Mournir Mouakhar also gave his association’s commitment to mobilise its members work towards increasing his country’s trade and investment with SA.

“We support the formation of a business council that we will use as a vehicle to promote trade and investment, but we are looking at a sector-specific approach as a starting point of identifying investment and trade opportunities that we can explore together.  We are also looking at the development of business relations among South African, Tunisian and French companies. The fact that Tunisia has become a member of Common Market for Eastern and Southern Africa means that businesspeople in the two regions will be able to work closely together and contribute in stimulating intra-Africa trade and investment,” added Mouakhar.

The President of the Tunisia-Africa Business Council, Mr Bassem Loukil said opportunities were available for Tunisian and South African companies to explore together in the automotive, pharmaceutical, agriculture and tourism sectors of the Tunisian economy.

“Our focus is on the intra-African trade and investment as well as assisting African companies expand their market to Europe. We are excited about the proposed structure that will bring us closer to the South African businesspeople in order for us to work together and increase trade and investment amongst the African Continent,” added Loukil.

Download logo
Deputy Minister Magwanishe with the President of the Tunis Chamber of Commerce and Industries, Mr Mournir Mouakhar during their meeting in Tunisia