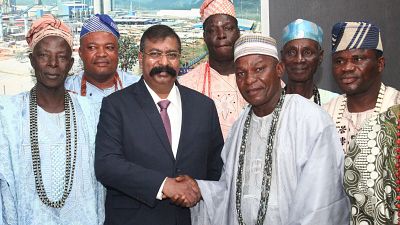 Impressed with the provision of communal infrastructures for their communities by Dangote Oil Refining Company (DORC) (https://Dangote.com) as part of its Corporate Social Responsibility service, traditional rulers and community leaders from host communities in Ibeju-Lekki Free Trade Zone area of Lagos have expressed appreciation at the timely intervention of the Company to their needs.

The monarchs numbering 14 at a stakeholder parley in Lagos with the management of DORC commended Dangote Industries Limited, the parent company for partnering them on various Corporate Social Responsibility (CSR) initiatives targeted toward the development of Lekki Free Trade Zone communities.

The Community leaders said that Dangote Industries had so far demonstrated its resolve to address the concerns of the people by complementing efforts of the state government to develop the host communities in the Lekki Free Trade Zone, where the Dangote Refinery, Fertilizer and Jetty are located.

The royal fathers pointed out that they appreciate the good gestures by the company by doing so much for the communities even when still at construction stage.

Speaking at the event, the Imobido Community head, Chief Jegede Lateef, commended the company for siting its refinery and petrochemical plants in the community saying his community was extremely lucky because the projects could have been sited elsewhere.

He emphasized the need for the company to ensure that the various investments translate to infrastructural development and employment opportunities for members of the host communities.

Also, the Head of Tiye Community, Chief Adewale Salami, who commended the company for the various completed and ongoing projects, promised that the community would at all times provide an enabling environment for the investment to thrive.

He said Dangote has done well in enhancing the welfare of host communities and urged it not to relent in its efforts to ensure that jobs are provided for qualified graduates who are indigenes of Lekki Free Trade Zone.

In his comment, the Olomowewe Community Head, Chief Shefiu Aguda said the communities had come to identify Dangote Industries as an organization that had shown concern for the welfare of the members of the communities, adding that many of the localities lacked basic social amenities prior to their contact with the company.

“The areas are gradually becoming like cities from its their usual old rural setting because of human and economic activities on daily basis,” he said.

The Group Executive Director, Dangote Industries Limited, Devakumar Edwin, who received the group expressed the company’s commitment to the execution of more strategic community development projects, particularly those that would improve the host communities.

He disclosed that the company actually conducted a baseline survey and needs in all the communities adding that it was the findings of the survey that were used in developing a comprehensive Community Development Plan (CDP) and that the company has already embarked on youth empowerment and leadership programme for the host communities.

Edwin added that the company will continue to support educational programmes, development of small and medium enterprises, improved infrastructure and creating awareness on proper hygiene and sanitation in the environment.

The Dangote Refinery boss said the aim of the company is to be a good neighbour in its areas of operation, by contributing to the well-being of neighbouring communities. “We work closely with them to manage the social impacts of our business activities, address any concerns about our operations, and enhance the benefits that we are able to bring. We work closely with communities to understand their concerns and identify how to address them. We aim to avoid or reduce any adverse impacts and to manage those impacts that may be unavoidable”, he added.

He said the company prides itself as being a relevant and integral member of its host communities and as a socially responsible organization. “We believe it is important to give back to our community. We will continue to provide support in every way we can to maintain a cordial relationship in the communities,” he added.

According to him, the company has a strong partnership with communities in the company’s areas of operation. “We support their aspirations and respect the communities’ traditions. We would thus commit ourselves to executing many more strategic community development projects, particularly those that we believe would rapidly improve the lives of Nigerians.”