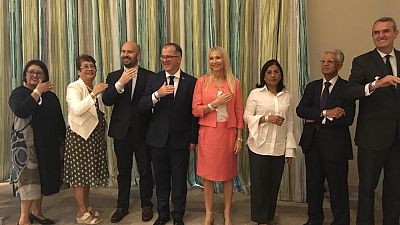 The Ambassador of the European Union (EU) to the Republic of Mauritius, the Chairman of the National Human Rights Commission and the Hon Vice Prime Minister, Minister of Local Government and Outer Islands and Minister of Gender Equality, Child Development and Family Welfare say NO to violence against women and girls.

The National Human Rights Commission and the EU hosted an event in the context of the International Day for the Elimination of Violence Against Women, to draw attention to gender based violence in the Republic of Mauritius.

The Ambassador of the European Union to the Republic of Mauritius, Ms. Marjaana Sall said:

The event is a joint initiative of the European Union (EU) and the National Human Rights Commission to mark the International Day against Violence against women. The half-day workshop aims at sensitising public officials, civil society and private sector on different issues linked to violence against women namely discrimination, domestic violence, and harassment.

Today's event is organised in the context of the European Union support to the United Nations' campaign on the elimination of violence against women (16 days of activism) which started on 25 November and will end on 10 December for the International Human Rights Day.

Eliminating violence against women is at the heart of the Universal Declaration of Human Rights that was adopted by the United Nations 70 years ago. In that respect, the EU and the

The event is organised in the framework of the project entitled 'Promotion of Respect for Human Rights in Mauritius and in Rodrigues' to raise awareness of various target groups like youth, law enforcement agencies, women, school children, judiciary and the public in general on women and children rights. Over the past year, more than 4,000 people have been trained on human rights under this EU-funded project implemented by the National Human Rights Commission.

The promotion and protection of human rights is at the heart of multilateralism, and a core and founding value of the EU. The EU works in close collaboration with various stakeholders in Mauritius, namely Government and civil society for advocacy and awareness of human rights and protection of rights of women and girls. The EU has set up with the Ministry of Gender Equality, Child Development and Family Welfare a High Level Policy Dialogue on Gender.  Through this dialogue, the EU and the Government of Mauritius have agreed on key objectives and actions to be monitored jointly for the promotion of gender equality, to address gender based violence, and the economic empowerment of women and girls among others.