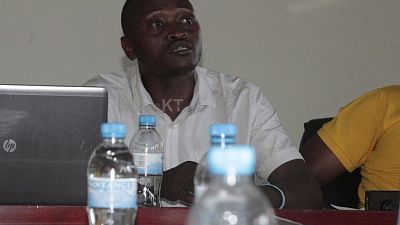 The elections will see six candidates become elected on the same day when a General Assembly takes place.

Former Secretary-General Tharcisse Kamanda is the only candidate who has declared to stand for the position of presidency in the forthcoming elections.

This comes days after former RRF president Alexis Araire showed no interest to return for the second term in office.

In his brief comments, Kamanda told this publication the decision to stand for the presidency is based on passion and belief that rugby needs new leadership and he says he is the right person to steer that new leadership.

“I want to help Rwanda rugby to grow, through capacity building of the administration and club members. As well as increasing the number of participants in the game,”

Kamanda revealed that if elected into office, his first task is to involve stakeholders and partners which is great to try and have a rugby pitch so that Rwanda can host more international competitions in the future. This will drive rugby to the glory that enthusiasts have sought for a long time.

In addition, Kamanda promised to improve the situation of the national team, Silverbacks and hinted at enough preparations time as a key factor, plus women rugby as well as grassroots and talent detection in schools.

Kamanda has not only been former SG but was the head of referees in 2012-2017, assistant women national coach 2014-2015, the player with the national team and player-coach with Kigali Sharks rugby club.

Two candidates are contesting for the position of vice president., these include Ernest Rubayiza from Kamonyi Puma ruby club and Phillip Gakirage formerly from Remera Buffaloes rugby club.

Flexi Uwitonze a former player with University of Rwanda rugby club Grizzlies and Lion de Fer club is the only candidate contesting for the position of Secretary General.

Delphine Ihirwe is the only female candidate re-contesting for the position of treasure. She represents Remera Buffaloes rugby club.

Thadée Abizeyimana from the committee in charge of elections said that having one female candidate standing as part of the executive committee which makes decisions is enough to constitute at least 30 per cent of the leadership structure however he noted that it is still a challenge in the sport.

Meanwhile, John Bosco Muamba, the  Rugby Regional Development officer is in Kigali from November 19-25, he will attend the election as representative of African rugby.

He visited the federation office for the union review, November 20th,2018.he will also visit  Rusizi-based club Resilience on thursday, November 22 where he wil deliver Level 1 get into rugby coaching clinic.