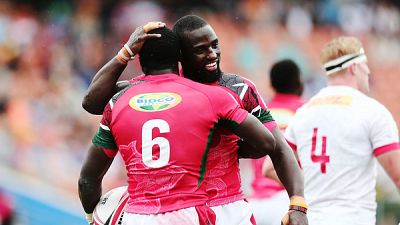 The two are joined by Brian Wahinya, who was part of the 2017/2018 academy and part of the Shujaa team (ShujaaPride.com) that lifted the Zimbabwe Falls Trophy in March this year. Coming back into the fort is Samuel Motari, Alvin Otieno, Leonard Mugaisi, Cyprian Kuto and Charles Omondi.

Alvin Otieno and Samuel Motari were in the history making Shujaa squad that lifted the Singapore 7s trophy back in 2016 while Charles Omondi, Cyprian Kuto and Leonard Mugaisi last represented the country on international duty in 2015. Head Coach Paul Murunga has retained Dennis Ombachi, Eden Agero, Eric Ombasa, Herman Humwa and Jeffrey Oluoch all who were in the previous season.

The team will kick off the 2018/2019 season in Pool B alongside Fiji, Scotland and France of the Dubai7s. Last Season Shujaa collected 10 points in the opening leg of the 2017-18 HSBC Sevens World Series season after finishing seventh in Dubai 7s, losing out 12-19 to Australia in the fifth place semis.

The Kenya Lionesses were crowned the Africa7s Champions in May. They beat Uganda Lady Cranes in the AfricaWomen7s in the final to lift the Champions Title.

By virtue of being the African Champions, the ladies were invited to participate in the second leg of the HSBC Women’s Sevens Series, the Dubai7s which takes place on the 29th and 30th of November.

The team is in Pool A alongside Ireland, Russia and the Glendale Champions New Zealand. Glendale is the first leg of the Women’s Sevens Series.

Head Coach, Kevin Wambua had this to share, “Our main goal is to be ready for next year, being in this Pool is big for us as we have qualifiers for the HSBC Series as well as the Olympics in Tokyo. We want to use this tournament to test some of the new players coming into the system.” Training so far has been very positive, we have brought in some new players who have a lot of potential in them. Our main focus especially with them is then need to fine tune their skill set in preparation for the coming year.”

Including the three new faces is part of our long term plan for the Lionesses to have depth as we prepare for the Tokyo Olympics Qualifiers later next year.

The team leaves for Dubai on Sunday 25th November.