Greenpeace Africa (www.Greenpeace.org) blew the whistle today on the Republic of Congo's most recent greenwashing campaign by exposing its plans to tender three oil blocks in the heart of newly-discovered peatlands that Environment Minister Arlette Soudan-Nonault has vowed to protect. Four peatland oil blocks are already under allocation, awaiting development.

Tendering for the “Licence Round Phase 2” blocks began in September and is being actively promoted by the Congolese regime this week at the Africa Oil Week conference in Cape Town (1).

“It is shocking to see how the Congolese regime is playing the international community on peatlands. The same regime that claims to champion peatland protection at big media events is now showing the world its real intentions. This is a set back for peatland protection and we cannot just sit and watch while green commitments are used to hide the quest for financial profit,” says Victorine Che Thöner, Project Leader of Congo Basin Project at Greenpeace Africa.

Covering 145,500 km² – an area larger than England – the Cuvette Centrale peatlands in the Republic of Congo and the Democratic Republic of Congo are estimated to contain 30 billion tons of carbon or the equivalent of nearly 20 years of the fossil fuel emissions of the United States. They are home to communities that have been protecting them for centuries.

The Republic of Congo's Environment Minister was applauded only a week ago by the FAO and UN Environment at the launch of a new International Tropical Peatland Center in Jakarta. In her keynote speech, she waxed poetic about the “rich biodiversity” of the Congo Basin peatlands and vaunted the region's role in the regulation of the world climate. (2)

In March 2018, she and her DRC counterpart signed an 11-point “Brazzaville Declaration” promising to “put in place land use plans that guarantee the conservation and protection of peatlands.”  But a clause about the “sustainable management” of zones covered by “economic activity” left the door open to business as usual. (3)

After “sustainably managing” the destruction of Congo's Intact Forest Landscapes for the international timber market, the regime of Denis Sassou Nguesso – in power discontinuously for more than 34 years – is now extending the phony “sustainable management” concept to peatland oil exploration.

One of the four peatland blocks already allocated is held by Italian major ENI, whose Milan offices were searched and documents seized last April in an investigation by an Italian court into alleged corruption in Congo. (4)  One of the others is held by French giant Total (5).

In all, 91% of Republic of Congo’s peatlands are covered by oil blocks. The new blocks span 17,915 km² of peatlands – the size of Kuwait.

Last 22 September, Soudan-Nonault announced a 15 million euro commitment by the German cooperation agency GIZ to the “sustainable management” of Congo Basin peatlands.  GIZ has yet to communicate about the financing. (6)

Will it do so before international bidding to tear up the peatland oil blocks closes in June 2019?

Greenpeace Africa demands the immediate cancellation of tendering of Republic of Congo’s three new peatland oil blocks and of the contracts of its four existing peatland blocks. 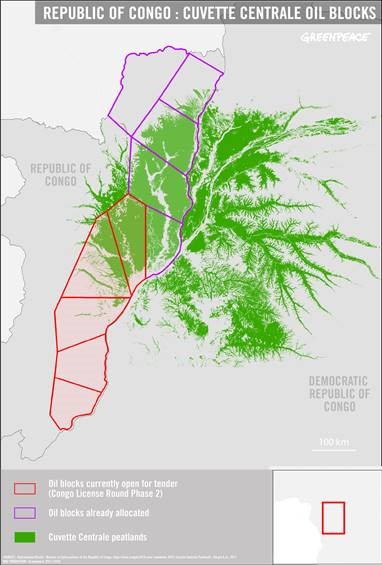