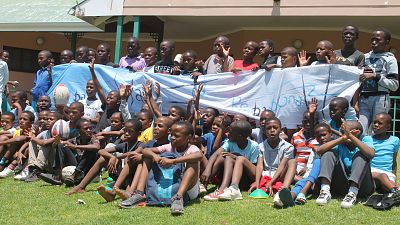 The Festival attracted a massive sixty four (64) boys and twenty three (23) girls on Saturday with ages ranging from eight (8) to the oldest being fourteen (14) giving a total of eighty seven (87) players in total. Prior to the festival, the Botswana Rugby Union technical team and the Jwaneng center coaches put the kids through the paces and conducted coaching sessions on Thursday and Friday.

This is part of BRU’s initiative to enhance grassroots development and empower its coaches at grassroots level. The Jwaneng RBBH centre was launched in September 2017, adding on to two other centres that the union had prior in Selebi Phikwe and Maun. Meanwhile the Selebi Phikwe centre also had their final activity of the year on Saturday at the Phikwe Stadium. The kids played in a mini festival and also had an opportunity to be lectured on life skills (goal setting) as well as be educated on the dangers of drug and alcohol abuse.

“The coaching clinic went very well and I am impressed with the progress of the children at our centres. We will continue in investing in coaches training and education to ensure that our children at the centres receive the best coaching from a young age,” Sports Development Officer at the BRU Frederick Kebadiretse said of the weekend activity.