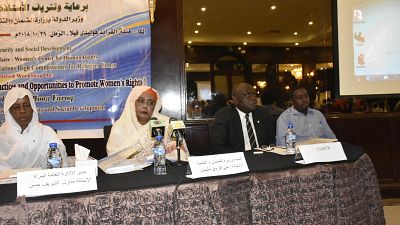 The Office of the United Nations High Commissioner for Refugees (UNHCR), in collaboration with the Ministry of Security and Social Development of the Republic of the Sudan organized a high-level workshop on the Sudanese women’s right to (pass) citizenship, on Monday 29 October 2018 at the Grand Holiday Villa hotel in Khartoum. The event brought together officials from the executive, legislative and judicial bodies in the Sudan, as well as the Advisory Council for Human Rights, the General Union of the Sudanese Women, the Sudanese Bar Association, the National Committee for Review of Women’s Status in Laws, National Civil Society Organizations and NGOs, media houses, as well as legal societies and women.

The workshop, the second of its kind in 2018, was opened by H.E. Ms. Mona Farouq Sulaiman, the State Minister for Security and Social Development of the Republic of the Sudan. The State Minister observed that this workshop was part of the ongoing efforts to empower women, particularly with regard to the acquisition and passing of nationality to their children, in compliance with the relevant international Conventions.

The event was a follow-up of the recommendations of the joint UNHCR- Arab League series of conferences on women and identity, in particular the recommendation relating to the sensitization of law and policy-makers on gender equality in nationality matters as well as the Global Action Plan to End Statelessness in the world by 2024 (through the removal of gender discrimination from nationality laws), under which the Sudan is one of the prioritized countries.

The State Minister stated that Sudan’s 2005 Constitution stipulates that citizenship shall be the basis for equal rights and duties for all Sudanese and has assured women’s rights, including the right of Sudanese mothers to pass nationality to children. She also stressed the importance of ensuring that all new born babies have access to birth registration and nationality documents. “It is very crucial to empower the Sudanese women and increase their awareness about their nationality-related rights. No one can deny the existence of a gap between the provisions of the nationality legislation relating to women and its implementation on the ground,” she said. “All the newborns shall be registered upon birth and are able to acquire the nationality,” she concluded.

In his opening remarks, Mr. Ron Mponda, the UNHCR Assistant Representative for Protection said the workshop is among the Action Plans foreseen in order to achieve the goals of the #IBelong Campaign. He expressed the hope that the outcomes of the workshop would contribute to the overall reform of laws and policies in the Sudan, towards the full, equal and non- discriminatory enjoyment of nationality rights by women in the country.

“Lack of identity documents poses serious challenges in terms of accessing basic services and enjoying fundamental rights, freedoms and protection. Discrimination itself comes from a variety of grounds, including sex or gender, arbitrary denial of nationality, being caught in situations of State secession as happened recently in 2011 in South Sudan, inadequate civil registration practices and exclusionary administrative actions when applying nationality laws, as well as gaps in nationality laws. Women in particular face difficulties and challenges in passing nationality to their children especially if they are married to foreign spouses,” he explained.

The workshop discussed two working papers tackling the acquisition of nationality through the maternal line which was introduced for the first time in the amendment of the Nationality Act in 2005, besides registration of all vital events including birth and marriage. It furthermore highlighted some of the important judicial precedents in relation to acquisition of nationality through the mother.

Among the important recommendations of the workshop were the need to intensify women’s understanding of their rights through awareness-raising campaigns as well as a review of the excessive documentary requirements and putting in place measures that ensure that the Civil Registry is accessible to people living in remote areas of the country.