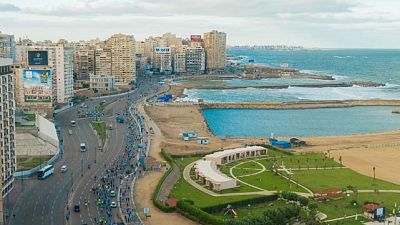 Egyptian and American athletes rallied around their shared love for running and promoting health and fitness this past week as part of the U.S. Department of State’s Sports Envoy program.  CEO of the Boston Athletic Association Tom Grilk, 1983 Boston Marathon champion Greg Meyer, and 1985 Boston Marathon champion Lisa Rainsberger were guests of U.S. Embassy Cairo and U.S. Consulate General Alexandria from October 22 to 27, leading organizational development and community outreach with local running groups and students.

The envoys advised Alex Runners on their second annual half marathon, held on October 26.  Grilk, who organizes the world’s oldest and one of the most elite marathons, The Boston Marathon, guided the team on race operations and logistics.  Rainsberger and Meyer advised on marketing and developing sustained partnerships with local businesses.

The half marathon, spanning along the churning Mediterranean Sea from the Four Seasons Hotel Alexandria to the historic Citadel of Qaitbay, drew more than 1,000 participants who competed in 21k, 10k, 1k family, and 1k wheelchair races.  U.S. Consul General to Alexandria Nancy Corbett greeted runners who hailed from more than 20 countries at the outdoor awards ceremony, which often took on the feel of an international music festival at the breezy beach venue.  Mostafa Shaghmim won the men’s 21k, with a time of 1:11:06.  Nesma Ammar won the women’s 21k, with a time of 1:29:41.

Grilk, Rainsberger, and Meyer also led running drills with Syrian refugees from the Syrian Sports Academy and Schutz American School students while in Alexandria.  Commenting on the outreach, Meyer said, “Through sport, we realize that we are all fundamentally the same, regardless of race, religion, or nationality.”

In Cairo, the envoys ran a 4k Fun Run with Cairo Runners at the Great Pyramids of Giza.  The group repeatedly remarked at how moved they were by the once-in-a-lifetime run was against the backdrop of the iconic pyramids.

The envoys later pivoted to talks with Alex and Cairo Runners over the groups’ larger ambitions to make Egypt a premiere destination for professional runners, regionally and internationally.  Both hoped to promote running and capitalize on sports tourism’s fast growth within the global travel industry, all while promoting Egypt’s broader tourism sector and fostering a greater awareness of health and fitness.