Statistics is the ‘new oil’ our leaders must exploit, says ECA’s Chinganya 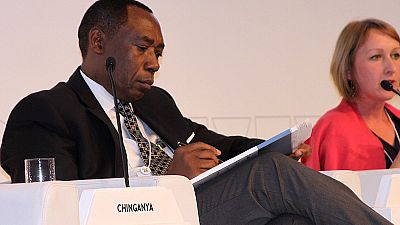 “Statistics is the new oil that our leaders must, henceforth, harness to engineer business processes on the continent,” said Oliver Chinganya, Director of the African Centre for Statistics (ACS) at the Economic Commission for Africa (ECA).

Mr. Chinganya deplored the fact that when it comes to funding for statistics, “we see more promises than action because our politicians sign documents and make bold statements but a lot of it ends at the level of statements and commitment.

He was speaking on 23 October during a panel discussion on ‘The Political Economy of Statistical Capacity’ at the 2nd World Data Forum in Dubai, United Arab Emirates.

The ECA official argued that governments need to take urgent, concrete and significant actions “to boost and utilize our statistical capacity, which will then guide their efforts to address ongoing global challenges in health, education, migration, gender, and the environment etc.”

Commenting on a “very successful” session organized by ECA at the Forum under the theme, “ Bringing Statistics Where Opinions and Decisions are Made,” Mr. Chinganya pointed out that the session provided a great bridging-the-gap opportunity for data producers and users.

“It was such a thrill to sit in that packed room with National Statistics Officers, journalists, researchers, policymakers, representatives of the civil society, academia, and other data stakeholders,” said Mr. Chinganya, adding “the discussions were vibrant, interactive, honest and enriching, and I think that speaks to ECA’s role as a big contributor to this drive for enhanced data and statistics in Africa.”

The panel was almost unanimous on the need for improved partnerships within the entire data production and consumption spectrum; the role of the media as essential stakeholders; and the importance of linking privately generated data to the tracking and monitoring of SDGs and African Union’s Agenda 2063.

Mr. Chinganya cautioned “we need to make sure that we have the necessary data by 2030, otherwise we end up where we found ourselves with the MDGs.

The official opening of the Forum was graced by UN Deputy Chief, Amina Mohammed, who invited “all data innovators to work together with the UN to improve the availability and use of disaggregated and local data.

“Together, we can safely and responsibly harness the power of data to achieve the SDGs and bring about a world where no one, absolutely no one, is left behind, she said.”

The Forum was hosted by the Federal Competitiveness and Statistics Authority of United Arab Emirates with support from the Statistics Division of UNDESA under the guidance of the UN Statistical Commission and the High-level Group for Partnership, Coordination and Capacity-Building for Statistics for the 2030 Agenda for Sustainable Development.