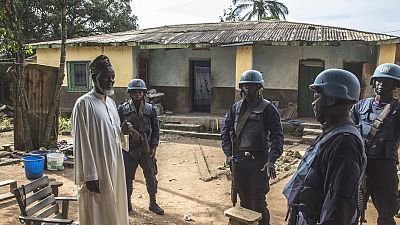 The top United Nations official in the Central African Republic (CAR), said on Tuesday he is “hopeful that the necessary foundations to build sustainable peace” have been established and that long-lasting stability will depend on the will of its people, and support from the international community.

Parfait Onanga-Anyanga, who also heads the UN stabilization mission in the country, MINUSCA, told the UN Security Council that, since the mission was established, “much progress” has been made to “extinguish the flames of the devastating inter-communal conflict.”

Civil conflict between Christian and the Muslims communities in CAR broke out in 2013 and, after a short respite in 2015, intensified again the following year, throwing the country into a new spiral of violence.

MINUSCA was deployed in 2014 with a mandate to protect civilians, support the political transition, assist with the delivery of humanitarian assistance and promote the disarmament, demobilization, and reintegration (DDR) process.

“The Mission is preventing atrocities daily and continues to preserve the State’s territorial integrity,” the head of MINUSCA said.

Among other “reasons to hope” that the Special Representative cited are the overall improvement in the security situation, the democratic elections held in 2015 and 2016, and the restoration of constitutional order across the country, as civilian authorities have been redeployed nationwide.

In addition, six non-state armed groups have agreed to participate in the DDR process which is to start by the end of the year.

“Our work is of course not finished,” he acknowledged, explaining that “the country is still facing numerous challenges. The drivers of conflict remain and attacks against civilians continue to take place, causing mass displacements of people.”

The UN office which coordinates humanitarian affairs (OCHA), estimates that close to 615,000 people are currently displaced in CAR and up to 2.5 million peopleare in need of life-saving aid.

“Half of the country needs humanitarian assistance, and the delivery of this assistance is becoming more and more difficult, especially because of violent attacks against peacekeepers and aid workers,” regretted Special Representative Onanga-Anyanga.

According to the UN Humanitarian Coordinator, Najat Rochdi, 2018 has been particularly deadly for aid workers: so far, this year alone, the number of attacks against aid workers and against humanitarian convoys or goods, nears 200. Since January, at least, six aid workers lost their lives. This general insecurity has led to temporary suspensions of life-saving activities in various localities.

“The path towards peace and reconciliation will not be an easy one,” declared Mr. Onanga-Anyanga. “Together with the Central Africans, we must now help move the country from a phase of containment, to one of transformation, where the dividends of peace can be felt by all communities and all citizens,” he told the Security Council, calling for the international community  to “work with the Government of the Central African Republic to ensure that this peace process is people-centered and does not fail”.

“While the current situation remains unpredictable and precarious, I believe that progress achieved in various areas and the foundations laid are essential ingredients,” he concluded, listing various conditions needed for sustainable peace to be achieved, including the buy-in of the people of CAR, an adequate security backdrop, and sustained international support.