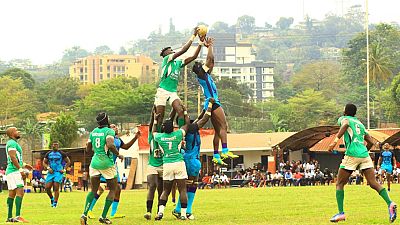 The Kyadondo based club fell to Betway Kobs, 10-08, in the semifinal on Saturday, at Legends Rugby Club.

The lunch time kick off was frenetic but erroneous in the opening minutes, but it was Kobs that were mostly on the front foot. They earned three penalties in the process but they were all fluffed by James Ijongat (2) and Ivan Kirabo.

At the other end, Kevin Keremundu could not find the posts for Heathens.

It was not long before Brian Asaba crossed for Kobs first try, but Kirabo could not add the extras.

Heathens switched the kicker on their second penalty but even Paul Epilo could not find the posts.

Kobs front pack was at work again with man of the match Ronald Musajjagulanyago crossing the try line, but like the first try, Kirabo’s conversion was wide.

Heathens responded as halftime neared and from a bullish maul nearly 30 meters out, Romano Ogwal scored their first try of the game. Keremundu could not convert.

After the break, Keremundu cut the deficit to 2 with a penalty.

Kobs would be third try was cancelled by referee Collins  Mulindwa  who had seen a forward pass in the buildup.

In the final scheduled for Saturday, October 27, Kobs will face holders Pirates who defeated Buffaloes 23-09.