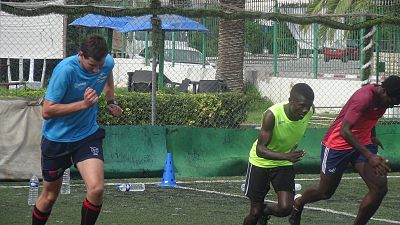 The twelve best African teams (apart from South Africa) will compete for the African Champion title. In 2019 they will be joined by Côte d’Ivoire and the Democratic Republic of the Congo who have just been promoted from regional pre qualification events. The 2019 Africa Men’s Sevens tournament will serve as Olympic Qualifier for Tokyo 2020. It is worth noting that should Kenya and South Africa – the two African teams competing in the Sevens World Series – finish in the top 4 of the 2018-2019 Series, they will automatically qualify for the 2020 Olympic Games. If they don’t, they will have to play in the 2019 Africa Men’s Sevens to earn their right to feature in the Olympic Games.

But right now, the focus is in Tunisia on the 2018 edition of the Africa Men’s Sevens tournaments being the biggest African rugby event with 12 teams from all over the continent : Kenya, Uganda, Zimbabwe, Madagascar, Zambia, Tunisia, Senegal, Morocco, Botswana, Ghana, Mauritius, Namibia.

In 2017, Kenya did not take part in the annual African tournament as they had already qualified for the Sevens World Cup based on their performance in the previous World Cup. But this year, they are back in the game and as keen as ever to be crowned African Champion.

Kenya Rugby Union President, Richard Omwela, is in Tunisia to support his team and comments :

“Kenya has just concluded the 20th edition of the Stanbic Bank National Sevens Circuit which serves as the national club sevens championship and it has again proven to be as competitive as ever, Menengai Cream Homeboyz winning a second overall title in three years. It has additionally unearthed amazing talent such as Stanbic Mwamba youngsters Daniel Taabu and Ronnie Omondi, Mark Wandetto from Homeboyz to name but a few who all have been selected in a 31 man provisional Kenya Sevens squad for the 2018/19 season. We hope to see these youngsters linking up with experienced hands like Collins Injera, Andrew Amonde and Eden Agero as we plot to reclaim our Africa title and take on the world during the upcoming season.”

This event is also an exciting opportunity for younger teams to assess their progress against stronger sides the likes of Kenya, Uganda or Zimbabwe.

According to Mr Herbert Mensah, President of Ghana Rugby, this will only be the second time that Ghana will take part in the Rugby Africa Men's Sevens tournament and the Union is looking forward to using the opportunity to develop its players. “Ghana is definitely still the underdog, as it was in 2017. The coaches and players have worked hard and everybody is looking forward to the opportunity to gain some much-needed match experience.”

Similarly, Botswana Rugby team manager, Matthew Gibson is very excited about the upcoming tournament. “We have opted to select our younger players and looked at the youth as the future and development of 7s within Botswana. Preparations for the tournament have gone well and I know that the players are looking forward to the opportunity to show case themselves in the International arena.”

The tournament is also used to build capacity with the ten best African referees – outside of South Africa – including two women gathered in a preparation camp under the guidance of Salem Attalah, former French top 14 referee and Alhambra Nievas, international referee and newly appointed referee development manager for World Rugby.

Watch Live on YouTube and on Kwese Free Sports:

- At the end of the pool stage of the first day, we establish a ranking in each pool: