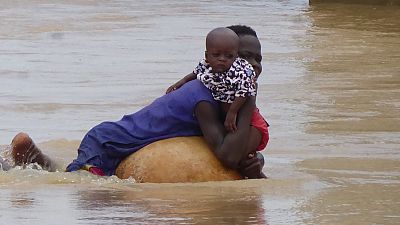 The United Nations Secretary-General António Guterres said on Thursday he is “deeply saddened”, as the Government of Nigeria announced that some 200 people have died, and a further 1,310 injured, due to flooding across a dozen states. Overall, around two million have been affected.
Nigeria’s two main rivers, the Niger and the Benue, burst their banks after heavy rains began in August, and the country has been experiencing large-scale floods ever since. A state of national disaster has been declared in the four most-affected states of Kogi, Niger, Anambra and Delta.
More than 561,000 people are internally displaced as a result and  over 350,000 need immediate help – especially temporary shelter, food, safe drinking water, household items and medical care.
In addition, more than 150,000 hectares of farmland are entirely inundated which raises serious medium-term food security concerns, as to how farmers will be able to replant vital crops.
Close to 80,000 houses were damaged including 18,000 completely destroyed, and more than 320 roads and bridges are impassable. In the most affected areas, children have not been able to go to school for weeks.
The Secretary-General extended his condolences to the families of the victims and to the Government and people of Nigeria and wished the injured a speedy recovery, stressing that the UN stands in solidarity with the country during this difficult time and “ready to support as required”.
According to the UN Office for the Coordination of Humanitarian Affairs (OCHA), activities conducted so far by the United Nations include: food distributions by the World Food Programme (WFP); the provision of emergency medical care as well as disease control for cholera and malaria, by the World Health Organization (WHO); and distributions of hygiene or “dignity” kits, for women and girls by the UN sexual and reproductive health agency (UNFPA).
Distributed by APO Group on behalf of United Nations (UN).
Media files

Download logo
UNDAC / Pierre Trouche | A mother and child attempt to escape the flood water in Niger State, Nigeria, following torrential rains which have hit the region since mid-July 2018