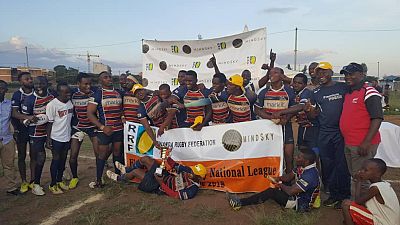 Sharif Gasore scored three tries to take away the game from Resilience in the opening half, while Emmanuel Dushimiyimana added a penalty before Christian Nduwayo capped things off with another try to seal the victory for his side.

But it was the fit and physical captain Barnabas Ngizwenayo and the man of the match Issa Gatera that formed the platform for the Sharks to dominate the league’s final showdown, which saw the club claim the first league championship since the club was formed 13 years ago.

In the post-match interview, Kigali Sharks skipper Ngizwenayo said: “I don’t know how to describe how I feel right now, we are very happy for the victory and for the first league title. We have won something special, and the best part is that we are not finished yet.”

“I thank my fellow players, coach, and members of the club for making this a successful season,” he added.

Resilience, which lost control and concentration in defence during the first half, tried to come back into the game in the second half but the efforts were not enough to save the day for the Rusizi-based outfit. Frederick Ngamijumuremyi scored two tries in the second half.

Minutes later, he motored on and bashed through the Sharks defense, but could not get in another crucial try for his side.

Samuel Nirera, who was in clinical form, made a lovely move which turned into the first conversion while Ngamijumuremyi scored another.

After the final whistle, Resilience captain Donatien Ufitimfura explained that his side lost the game plan, concentration and control in defence after conceding two tries in the first half.

As the season came to a close, Sharks – who beat 2017 champions Remera Buffaloes in the last four – celebrated not only the trophy but also the qualification to represent Rwanda in the regional rugby club championships.

“Let me take this opportunity to thanks Resilience Rugby Football Club from Rusizi, for putting up a fight to reach the final. This shows how the level of local rugby is improving positively since if a team from Rusizi can beat Kigali clubs to reach the final it means the sport in improving.” He said.

As winners, Sharks did not only walk away with a title but a cash prize of Rwanda 150,000 and rugby kits while Resilience walked away with Rwanda franc 100,000 a trophy and other kits.