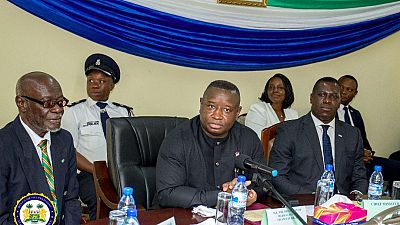 His Excellency President Julius Maada Bio has inaugurated new members nominated on the University Court of Sierra Leone at a brief ceremony on Fourah Bay College campus, established in 1827 as the first western-style university in West Africa.

With a three-year mandate, the Court is the highest decision-making body as provided for in the Universities Act of 2005. The Court has the authority to formulate and introduce new policy guidelines to govern the operations of the University within the framework of the law.

In his keynote statement, President Bio said the installation of nominees was coming at a time when the new administration of the university, under the aegis of the newly created Ministry of Technical and Higher Education, was taking the process of reclaiming its position among centres of excellence not only in Africa but also in the world. He said the current minister, having served as Vice Chancellor and Principal of the University of Sierra Leone, was well placed to enable the university achieve its noble goals.

He noted that the membership of the University Court had been carefully selected from various facets of the society to help the institution surmount the many challenges associated with access to access university education in the country. He added that the court would continue to have a critical role to help the university achieve its goals. He, therefore, called on the newly constituted court to work assiduously to ensure that the goals and benchmarks set by the university were achieved.

“I note, with great concern, that for a long time the educational system in the entire country has suffered serious setbacks, both in terms of capacity and the quality of its products. This is the reason quality education became one of my flagship programmes during my campaign and upon assuming office as President of Sierra Leone. I am also aware that our educational system is fraught with a lot of challenges. My government is, however, determined to overcome these challenges with your help and goodwill. We shall succeed in this endeavour,” he said.

President Bio also expressed concern about the unfortunate practice of cultism by students in the university. He mentioned that freedom of association was a fundamental human right enshrined in the country’s constitution and should be respected at all times. He, however, pointed out that it was worrisome when students, who were expected to demonstrate high ethical standards, hide behind the cloak of fraternities and sororities to engage in cruel and sometimes fatal practices against their colleagues as a rite of passage to membership of these clubs.

“The university should not become a sanctuary for cultism or secret societies. This is unacceptable and my Government will not tolerate that anymore. I am very much encouraged by the new administration’s avowed determination to curb cultism and other anti-social behaviours in the university by taking necessary disciplinary measures,” he ended.