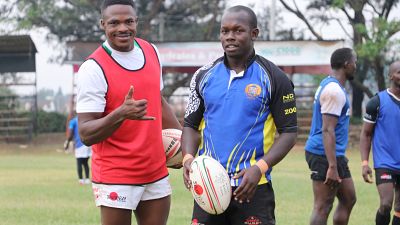 A 12-man Kenya 7s squad that will compete at Africa 7s held their final run in Nairobi on Tuesday ahead of Wednesday's departure to Tunisia.

Head Coach Innocent Simiyu oversaw the run as he makes his final touches with the team as his contract will expire after Africa 7s to be replaced by Homeboyz head coach Paul Murunga.

In Tunisia, Kenya is set to play Morocco and Botswana in pool matches as they seek to win a cup they lastly won in 2016 when they beat Zimbabwe in South Africa.

“I know we technically or physically we may be a bit better than them but of course you have to give it to them they have prepared so we will leave no stones un-turned and give our best.”

“There is more pressure on Uganda as the defending champions. For us we are just happy to be there, we just want to express ourselves we have a lot of new blood coming in, we want to see how they will play how they will respond to that level and hopefully we can get the good result.”

“Training has been difficult, we had little time to prepare but the key thing is the boys are up to play physically so we are quite happy and we hope we will have a good outing.”

A number of those set to represent Kenya 7s in Tunisia were selected from the just concluded national sevens circuit with this set to be their first outing.

“They have a lot of excitement you have to understand, it's their story, for most of them their journey has begun so it's just doing small things well, going up there, express themselves and building up from there and hopefully get some good results for the team.”

“I think Africa 7s it's quite good, we have more regional tournaments to help the game grow because for us as Kenya to remain in the top tier we need to be having some good formidable competitions back at home in the region, we are also happy to have this chance to expose our guys at that level.”

The 2017 Africa 7s cup was used as a route to the World Cup Sevens held in San Francisco, USA in July. Kenya gave it a wide berth having already qualified by virtue of making the semis back in 2013.