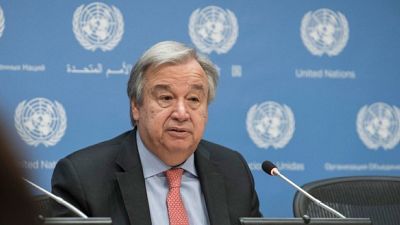 In a statement from his spokesperson, the UN chief also called on all stakeholders to “exercise restraint before, during and after the election.”
He also urged all Cameroonians to exercise their democratic rights, urging all candidates “to address any complaints related to the electoral process through established legal and constitutional channels.”
Nine candidates are contesting the elections to the country’s highest body, according to media reports.
Further in the statement, the Secretary-General condemned all threats of violence or acts of intimidation by any group and reiterated that all grievances should be addressed through inclusive dialogue.
“The United Nations stands ready to provide support in this regard,” added the statement.
Insecurity is a concern in Cameroon in the country’s north, as a result of activities of the Boko Haram terrorist group, and according to the UN Office for the Coordination of Humanitarian Affairs (OCHA), there are some 160,000 persons displaced across the country – a majority of them in the south-west.
Distributed by APO Group on behalf of United Nations (UN).
Media files